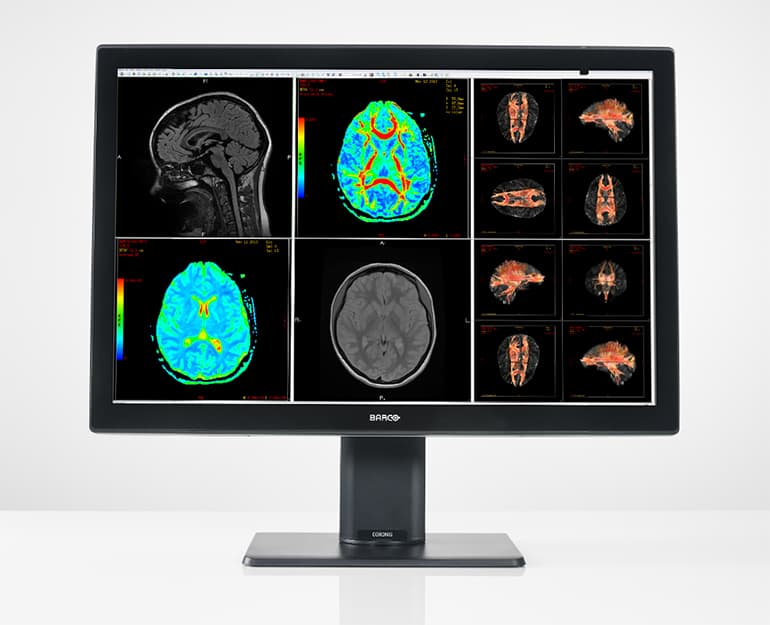 At the upcoming RSNA event in Chicago next week, Barco will be unveiling a new version of its top of the line multi-modality diagnostic display. The Coronis Fusion has been an industry leader, as most radiologists will probably tell you. It is an impressive monitor, but competition has been catching up over the last decade. The new Coronis Fusion, available in 6 megapixel or 4 megapixel models, takes a big step by offering a significantly better contrast ratio than before.

Previously, the device had an already very high 1500:1 contrast ratio, but the new display has a 2000:1 contrast ratio. This should help with discerning very fine differences in both color and grayscale images, helping to improve diagnostics and reducing the strain on the eyes of radiologists.

The display sports a calibrated luminance of 600 cd/m2, a wide viewing angle, and all the popular features, such as SpotView and SoftGlow, that help to focus on the task at hand while reducing strain.

For color images, the Coronis Fusion features a wide color gamut and SteadyColor technology that accurately calibrates the colors displayed.

vamtam-theme-circle-post
 Category Updates
While the COVID-19 pandemic has seen some countries respond well to the ongoing health crisis for their own populations, it has also – despite decades of increasing and...
Read More

Eko Releases New CORE Digital Stethoscope OfferingsMedgadget Discovers How To Start an Irish Medtech Company