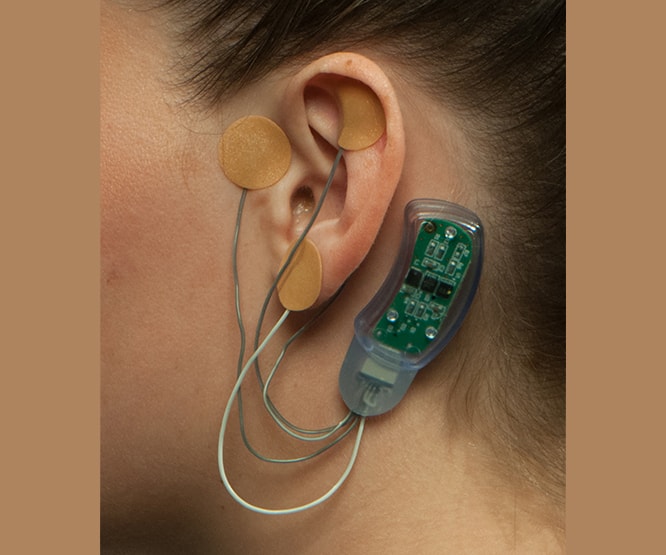 Masimo has announced that it’s making the Bridge device available, the first electronic therapeutic solution for tackling opioid withdrawals. Originally developed by Innovative Health Solutions, a Versailles, Indiana firm, the Bridge delivers neuromodulation to a set of occipital and cranial nerves (V, VII, IX, and X) via electrodes attached near the ear. The therapy helps to lessen withdrawal symptoms, including insomnia, agitation, sweating, and other irritabilities.

The technology was approved three years ago as an opioid withdrawal treatment, and three years before that it was FDA approved for use in acupuncture. The opioid withdrawal approval was founded on a study involving 73 patients that were experiencing physical symptoms of withdrawal. Before using the device the subjects had an average clinical opiate withdrawal scale (COWS) score of 20.1 (the higher, the worse the symptoms). Using the device, the subjects had a reduction in the COWS score by at least 31% within a half hour of therapy activation. Moreover, 64 out of the 73 patients switched to medication-assisted therapy after five days of using the Bridge.

The device is positioned in a matter of minutes by a clinician to make sure the electric signals stimulate the right nerves. After initiation, reduction of symptoms begins in about 15 to 30 minutes and treatment can last continuously for days, allowing opioids to leave the body in the meantime.

“Unassisted withdrawal from long-term use can be lengthy, extremely unpleasant, and there is a high risk of relapse,” said Joe Kiani, CEO of Masimo in a press release. “Effectively helping to reduce opioid withdrawal symptoms, which is what Bridge has been shown to do, is a critical first step toward successful illicit opioid cessation and treatment. This is the first tool that we are introducing to help with the opioid epidemic. We are committed to doing what we can to help reduce opioid-related deaths.”

vamtam-theme-circle-post
 Category Updates
While the COVID-19 pandemic has seen some countries respond well to the ongoing health crisis for their own populations, it has also – despite decades of increasing and...
Read More

Glove Interprets Sign Language in Near Real Time‘Dirty’ data in EHRs could cause unnecessary expenses