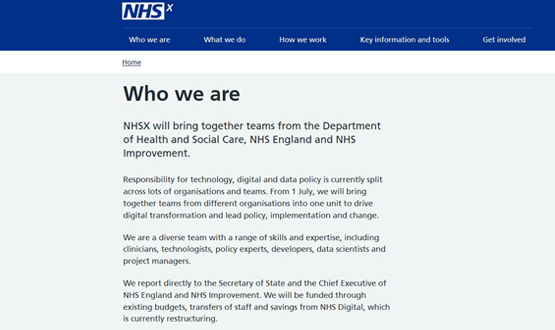 Officials have said a suggestion NHSX will be funded by “transfers of staff and savings” following the NHS Digital restructure was published in error on the new unit’s website.

NHSX opened in shadow form at the beginning of April. That included the launch of a website for the new unit, which has been created to oversee digital transformation of the health and care system.

A day later, Digital Health News was made aware that under the section “Who we are” the following paragraph was published:

“We will be funded through existing budgets, transfers of staff and savings from NHS Digital, which is currently restructuring.”

News of NHS Digital’s restructure, labelled “Org2”, was first reported in August 2018. In November of the same year, health and social care secretary Matt Hancock announced it could result in around 500 staff losing their jobs. 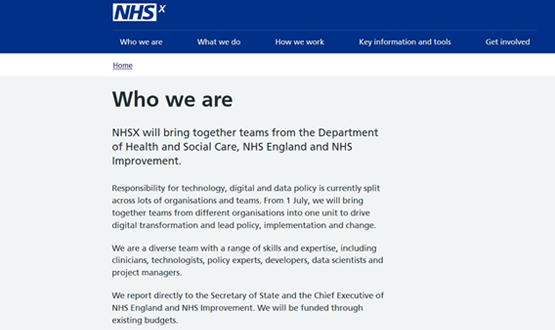 The statement was later amended.

When Digital Health News contacted the Department of Health and Social Care (DHSC), a spokesperson said the paragraph was published by mistake and that the statement has now been removed from the website.

The DHSC spokesperson added: “NHSX will bring together existing teams into one unit so no new funding will be required.

“NHS Digital has deep expertise in the management of large-scale, complex IT systems and will continue to play a key role in delivering high quality technology and data projects across the NHS.”

The launch of NHSX in shadow form also saw confirmation of its first chief executive. Matthew Gould, the former government director for cyber security, will join in July for the body’s official launch.

vamtam-theme-circle-post
 Category Updates
While the COVID-19 pandemic has seen some countries respond well to the ongoing health crisis for their own populations, it has also – despite decades of increasing and...
Read More

London ambulance staff to be given real-time access to patient dataON-Q* with Bolus Pump Cleared in U.S. for Pain Management