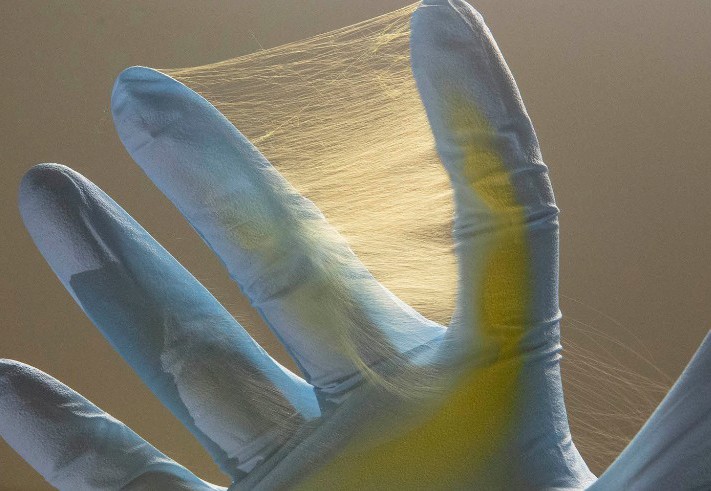 Electrospinning is a manufacturing technique that has recently been getting a lot of attention in medicine because it allows researchers to produce novel materials and devices. Essentially, a polymer is melted and squeezed through a nozzle and an electric field is used to pull and spin it into a mesh of very fine fiber. The material has a huge surface area, given its volume, and it can be combined with drugs and other devices, and used as a part of therapies in all sorts of ways.

There’s also a type of electrospinning called coaxial electrospinning, and it allows for two or more very different polymers to be spun together while retaining the necessary properties of each one of them. One of the polymers ends up wrapped by others, allowing for combinations such as strength and flexibility, the containment of a drug and a way to release it, and the delivery of multiple drugs that are released depending on their location or chemical environment.

Researchers at the University of Cincinnati have been working on perfecting coaxial electrospinning and putting it to use in medicine.

The team has already developed a novel tampon-like contraceptive that can trap and kill living sperm and it will be trialed because the National Institutes of Health has approved a five year study that will evaluate and help to perfect the device. They also plan on making a similar coaxially electrospun contraceptive that releases anti-infective drugs post sexual intercourse.

The Cincinnati researchers are also working with a team from Johns Hopkins to deliver chemotherapy to brain tumors using the electrospun fibers. The fibers can carry a substantial amount of chemotherapeutic drugs that can be delivered locally, without much toxic effect on the rest of the body. The drug formulations within the electrospun fibers can be easily customized for each patient and animal trials have demonstrated that the fibers work better than other techniques for fighting glioblastoma.

Via: University of Cincinnati

vamtam-theme-circle-post
 Category Updates
While the COVID-19 pandemic has seen some countries respond well to the ongoing health crisis for their own populations, it has also – despite decades of increasing and...
Read More

AI-Powered Voice Assistance Behind New Digital Health Company Frontive Health (Interview)Bruin Biometrics Is on a Mission to End Pressure Ulcers: Interview with CEO Martin Burns