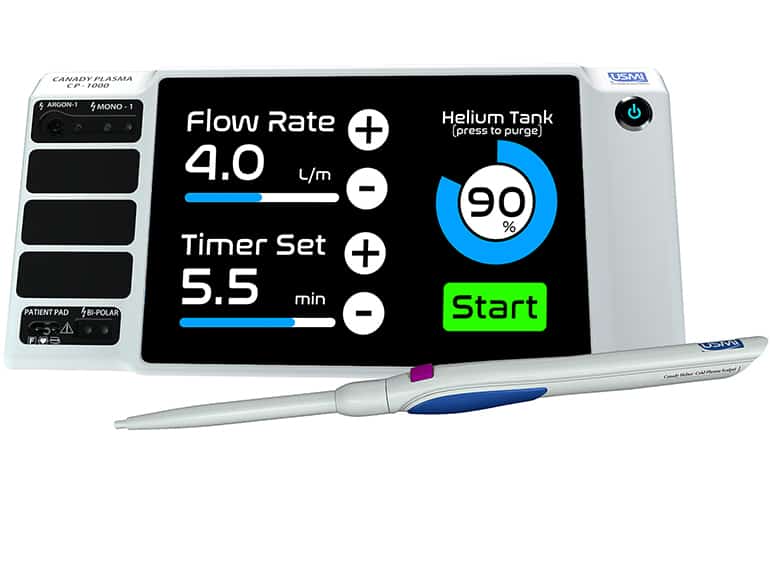 Cold plasma is an unusual gaseous substance in which only the electrons are heated to thousands of degrees, with the rest of the material remaining at room temperature. Purdue University researchers have advanced this field and have helped to make it ready for clinical applications, since cold plasma has the ability to kill target cells while sparing nearby cells. In particular, Purdue researchers created one of the first practical cold plasma generators and tested how cold plasma affects biological tissues.

Now, a cold plasma device from US Medical Innovations, a company based in Takoma Park, Maryland, just won FDA approval to be tested in the first clinical trial of the technology. The Canady Plasma XL 1000 device features a pen-like applicator, an electrosurgical scalpel, which emits a jet of cold plasma. Targeting only tumor cells, the device shouldn’t have much impact on surrounding healthy tissue, which has already been confirmed in vitro, in vivo, and in compassionate use clinical cases.

The developers of the technology hope that cold plasma may serve as one of the main tools that physicians have to attack tumor cells. “Cold plasma application is the fourth arm for the treatment of cancer, following chemotherapy, radiation and surgery. There’s no other ‘magic bullet’ out there for killing off residual tissue,” said Jerome Canady, one of the chief developers of the technology, in a press release.

vamtam-theme-circle-post
 Category Updates
While the COVID-19 pandemic has seen some countries respond well to the ongoing health crisis for their own populations, it has also – despite decades of increasing and...
Read More

Ransomware and medical devices: How behavior analytics can protect patientsSensor Reads Signs of Oncoming Aggression in Autism