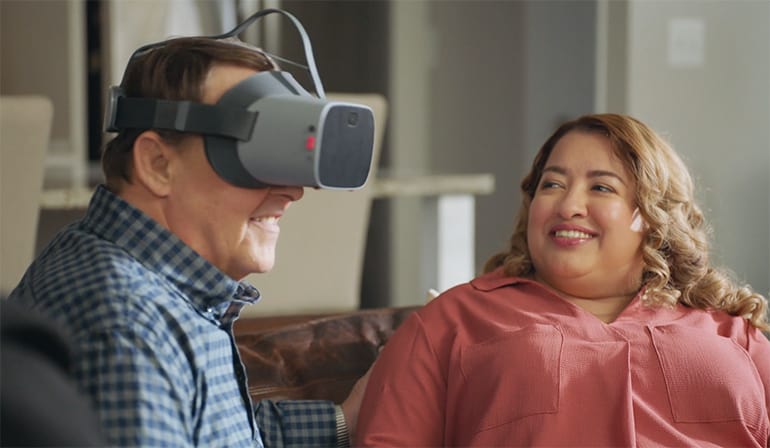 In the past few years, Comcast, a television company, has been putting some serious effort into making its content more accessible to people with disabilities. It recently released its X1 eye control offering that lets users change channels, search for shows, schedule recordings of shows, and more by simply looking at specific areas of the screen. The company even released a show, called Wiz Live, which provides a live voice description of what’s going on to people with poor vision.

Now, the company has partnered with NuEyes, a company that makes virtual reality and video amplification headsets, to give people with low vision a way to watch TV and even see things they would otherwise not be able to.

The NuEyes e2 headset is a wireless, self-contained device that can be worn for long periods of time. It has a 1440 x 1600 (3K) display with a 101 degree field of view, running at a 90Hz refresh rate. A camera on the front of the device can be used to visually amplify what is ahead.

Coupled with the Xfinity Steam app, pre-installed on the headset, the NuEyes e2 can play what’s being shown on the TV, but so large that even people with poor vision can see quite a bit of what’s going on.

“Collaborating with Comcast has been an absolute joy,” said Mark Greget, Founder and CEO of NuEyes, in a press release. “To be able to stream content directly to our consumers’ eyes in a way that has never been done before enables millions of visually impaired people to continue enjoying their TV experience and more.”

Here’s a video Comcast released about the project:

vamtam-theme-circle-post
 Category Updates
While the COVID-19 pandemic has seen some countries respond well to the ongoing health crisis for their own populations, it has also – despite decades of increasing and...
Read More

SOZO System FDA Cleared for Protein Calorie Malnutrition AssessmentFDA Clears First Completely Disposable Duodenoscope