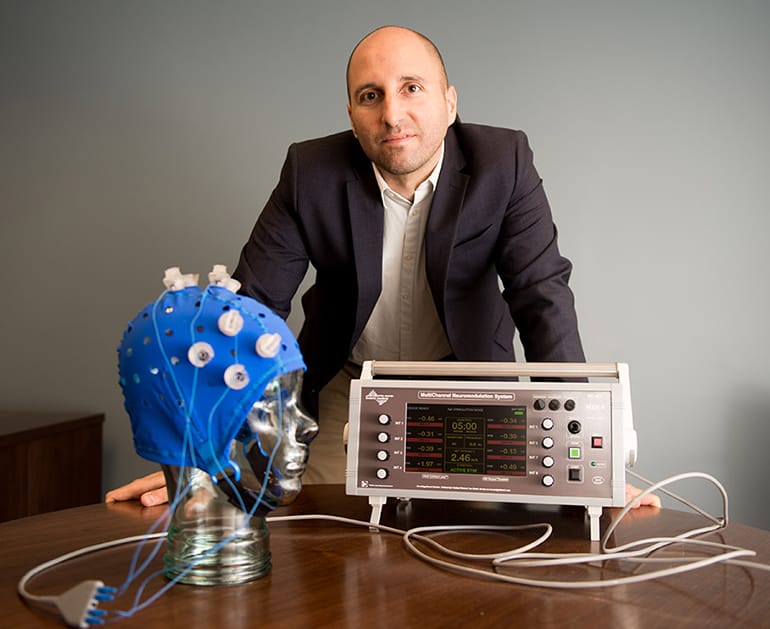 The performance of our working memory starts to go down right around the time we finish residency. The older we get, the more difficulty we have forming new memories and holding on to them for a long time. Because it’s still a mystery how the memory system of our brains works, a decline in its function has been mostly accepted as a given fact that’s difficult to do anything about.

Now researchers at Boston University have done something truly amazing, essentially giving 70 year-olds the memory abilities of 20 year-olds. The team applied external electric stimulation to the brains of older adults so as to couple and synchronize the brainwaves throughout different brain regions.

Following a 25 minute therapy session, the adults in their 70s, as well as those in their 20s that didn’t receive treatment, were subjected to a simple visual memory task. They were asked to memorize an image and to some time later identify whether a new image shown to them is the same as the original one. The old farts, who just a half hour earlier were pretty weak with the same memory task, were able to perform on the level with their younger counterparts.

So far, the benefits of the therapy have been tested to only 50 minutes past treatment time. Much more evaluation of this approach will be necessary to identify any safety issues and to optimize it to receive the greatest benefit for the longest time possible.

Here’s an explanation from Boston University of the underlying mechanism that seems to be at work for this therapy:

Coupling occurs when different types of brain rhythms coordinate with one another, and it helps us process and store working memories. Slow, low-frequency rhythms—theta rhythms—dance in the front of your brain, acting like the conductors of an orchestra. They reach back to faster, high-frequency rhythms called gamma rhythms, which are generated in the region of the brain that processes the world around us.

Just as a musical orchestra contains flutes, oboes, violins—so too, the gamma rhythms that reside within your brain each contribute something unique to the electricity-based orchestra that creates your memories. One gamma rhythm might process the color of an object you’re holding in your mind, for instance, while another captures its shape, another its orientation, and another its sound.

But when the conductors fumble with their batons—when the theta rhythms lose the ability to connect with those gamma rhythms to monitor them, maintain them, and instruct them—the melodies within the brain begin to disintegrate and our memories lose their sharpness.

Meanwhile, synchronization—when theta rhythms from different areas of the brain synchronize with one another—allows separate brain areas to communicate with one another. This process serves as the glue for a memory, combining individual sensory details to create one coherent recollection. As we age, our theta rhythms become less synchronized and the fabric of our memories starts to fray.

[Rob] Reinhart and [John] Nguyen’s work suggests that by using electrical stimulation, we can reestablish these pathways that tend to go awry as we age, improving our ability to recall our experiences by restoring the flow of information within the brain. And it’s not just older adults that stand to benefit from this technique: it shows promise for younger people as well.

vamtam-theme-circle-post
 Category Updates
While the COVID-19 pandemic has seen some countries respond well to the ongoing health crisis for their own populations, it has also – despite decades of increasing and...
Read More

NHS Digital enters five-year partnership with GS1 UKEngineered Matrix to Improve T Cell Immunotherapy