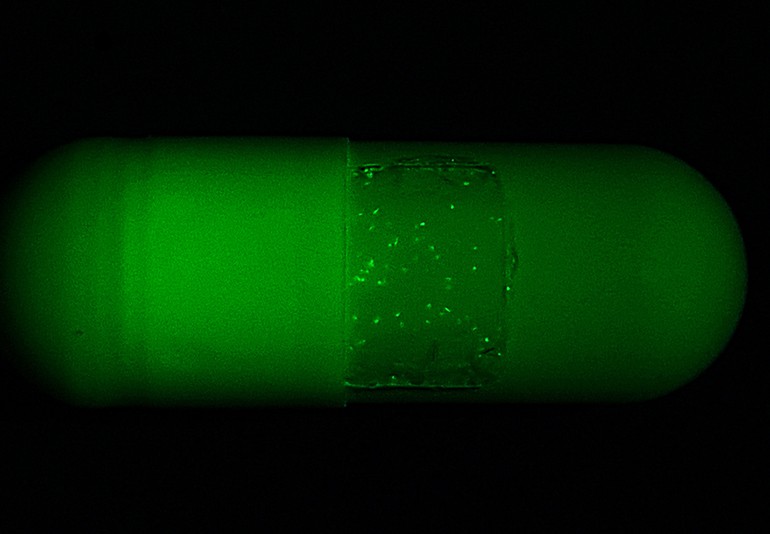 Sales of counterfeit drugs are disturbingly common around the world. Some patients end up not receiving necessary treatments, while others are harmed by ingesting whatever substances are inside the fake pills. Researchers at Purdue University have now come up with a way to tag medications so that forgers can’t do the same to their fakes.

The researchers created tiny digestible films, made of proteins, that can be stuck to pills and tablets, and which have fluorescent particles that display digital signatures that are extremely difficult to copy. These so-called “edible unclonable functions” are a variation on physical unclonable functions (PUFs) that have been developed for hardware security and to verify data source authenticity.

Made of silk protein and one of a number of various colored fluorescent proteins, the tags fluoresce when exposed to an LED light source. Each time they’re activated they produce a different pattern, which makes them very hard to copy. Even the original maker of the tag will find it nearly impossible to recreate it. The various patterns that the tags make have a digital security key embedded within them that can be verified using an appropriate computer vision algorithm. This can be built into a smartphone app, and if the phone has the right kind of light source that can activate the tag, it can be used to check the validity of the drug the tag is attached to.

Along with the security key, the fluorescence pattern can also encode other information such as the drug expiry date, who manufactured it, and other relevant data that may be important to patients, regulators, and drug makers.

Here’s a Purdue University video with the researchers showing off and describing their technology:

vamtam-theme-circle-post
 Category Updates
While the COVID-19 pandemic has seen some countries respond well to the ongoing health crisis for their own populations, it has also – despite decades of increasing and...
Read More

PENTAX Releases IMAGINA LED Powered Endoscopy SystemFDA Clears Morph DNA Catheter to Guide Cell Delivery into Heart Tissue