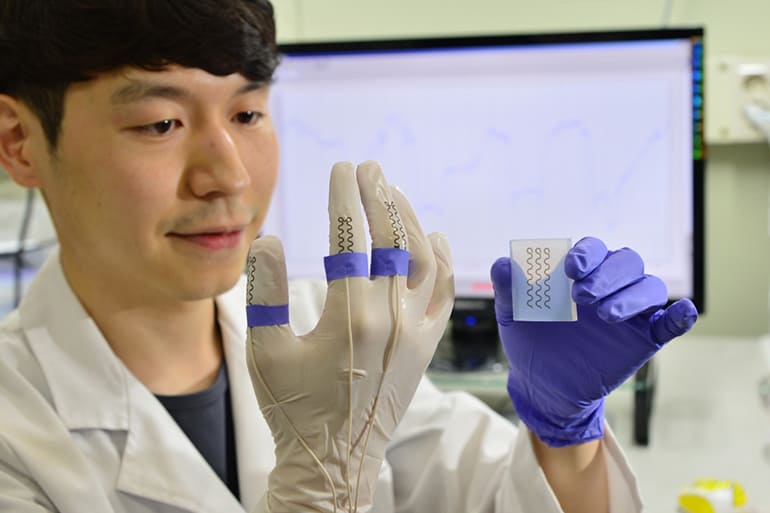 Scientists around the world are actively using hydrogels as novel materials to interface with the body in a variety of ways. At the same time, the field of flexible electronics has progressed to the point that there’s real demand to integrate electronic components with hydrogels. Now, researchers at the Korea Institute of Science and Technology in Seoul have developed a way of transfer-printing flexible electronic circuits and sensors onto the porous 3D surface of hydrogels.

They use a nano ink, pushed through an inkjet printer, to create circuits on a transfer mold. The resulting circuits can be transferred to the hydrogel, contouring its shape and texture, with the original substrate on which it was printed being removed. The technology doesn’t melt the hydrogel, maintaining its desired characteristics.

This process is somewhat like the tattoo stickers used by kids, where the “tattoo” is transferred onto the skin on a piece of paper, which is then removed, leaving the image on the skin.

Because the conductive nano ink seeps into the crevices of the hydrogel, it maintains conductivity even if the substrate is flexed and pulled.

To prove their technology in practice, the Korean researchers created a glove with a flexible circuit network and pressure sensors that can detect the movement of the fingers and even the pulse within the wrist.

“The outcome of this study is a new and easy method for creating flexible, high-performance sensors on surfaces with diverse characteristics and structures,” said Dr. Hyunjung Yi, the leader of the research. “We expect that this study will be utilized in the many areas that require the application of high-performance materials onto flexible and/or non-traditional substrates, including digital healthcare, intelligent human-machine interfaces, medical engineering, and next-generation electrical materials.”

Via: Korea Institute of Science and Technology

vamtam-theme-circle-post
 Category Updates
While the COVID-19 pandemic has seen some countries respond well to the ongoing health crisis for their own populations, it has also – despite decades of increasing and...
Read More

Device for Opioid Overdoses Releases Naloxone AutomaticallyPrisMax for Continuous Renal Replacement Therapy FDA Cleared