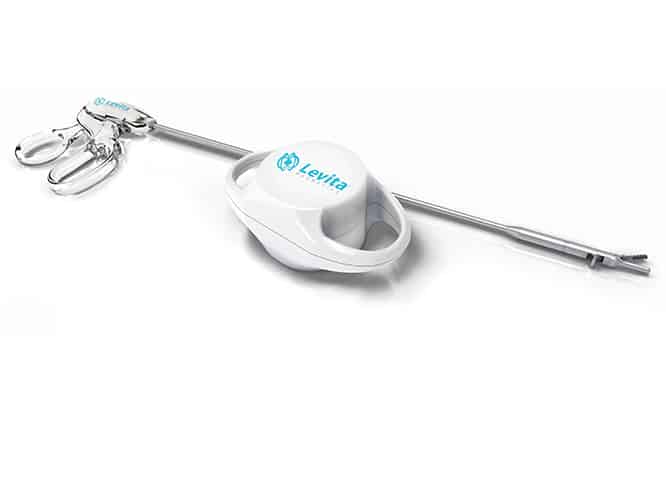 Minimally invasive surgical procedures are potentially safer, easier on patients during recovery, and can even reduce the cost burden on hospitals, when compared with conventional open surgeries. There are still serious risks that are involved, in large part arising from the laparoscopy sites that need to be punched in the abdomen through which instruments are delivered and used. The fewer such incisions, the fewer possible complications. Levita Magnetics, a San Mateo, California firm, has been working to widen the scope of its Magnetic Surgical System so as to reduce the number of access ports used during minimally invasive procedures. The company just received FDA clearance for its system to be used during prostatectomies, procedures that can now result in one less hole.

The Levita Magnetic Surgical System consists of a grasping tool that’s delivered to the prostate using an access port. Once it grasps the prostate, the shaft through which it is inserted can be removed and the same port can now be used for an laparoscope or some other device. An external magnet, placed over the treatment area, is used to move the grasper around and therefore pull on the prostate, something that is normally done using a conventional shafted tool.

Not only does the system reduce the number of incisions, it also reduces the number of shafts within the physician’s field of view, making the working scene clearer and easier to operate on.

In addition to the new prostatectomy indication, the system is already being used during cholecystectomy (gallbladder removal) and bariatric surgical procedures.

Here’s an animation showing how the Levita system would be used during a prostatectomy:

vamtam-theme-circle-post
 Category Updates
While the COVID-19 pandemic has seen some countries respond well to the ongoing health crisis for their own populations, it has also – despite decades of increasing and...
Read More

Rice Students Develop Non-Invasive Intracranial Pressure Sensor to Monitor InfantsBoosted accelerator programme will fast-track digital services in NHS