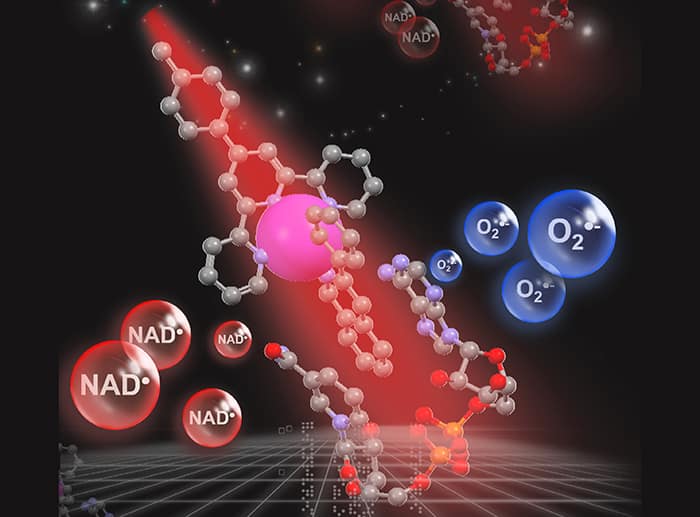 Photodynamic therapy is a technique that relies on photosensitizer chemicals to generate reactive species that kill cancer cells. These compounds can be delivered into tumors and then light is used to activate them. One of the main reasons for the slow adoption of this technology is that tumors are usually oxygen deprived and the photosensitizers developed to date require the presence of copious amounts of oxygen.

Now, an international team of researchers has developed a new compound, based on iridium, that works in low oxygen environments and attacks an important metabolic process within cells. The capability, if confirmed in clinical studies, may have significant consequences for fighting a variety of tumor types. Moreover, the researchers believe that their approach may also spur the body into developing an immune reaction that will protect patients from the recurrence of other similar cancers.

The iridium compound works to destroy the nicotinamide adenine dinucleotide (NADH) co-enzyme by catalytically destroying it or changing it into its oxidized form. NADH is an important part of cellular energy generating processes, so attacking it effectively starves the cancer cells.

“Drugs can kill the cancer cells initially, but with repeated treatment the cells become resistant, they learn how to chemically modify the drug or counteract its mechanism of action,” said Professor Peter Sadler from the University of Warwick, one of the developers of the new compound, in a press release. “Researchers are looking for novel ways in which the cancer cell will die. If they have become resistant to other cancer drugs, they may not be resistant to this treatment because the way it kills the cancer cells is different. There is an increasing interest in reducing the side effects of cancer treatment as much as possible and anything that can be selective in what it targets will help with that. The compound that we have developed would not be very toxic at all, we would give it to the cancer cells, allow a little time for it to be taken up, then we would irradiate it with light and activate it in those cells. We would expect killing of those cancer cells to occur very quickly compared with current methods.”

Via: University of Warwick

vamtam-theme-circle-post
 Category Updates
While the COVID-19 pandemic has seen some countries respond well to the ongoing health crisis for their own populations, it has also – despite decades of increasing and...
Read More

Apps for Healthcare Monitoring: Interview with Artem Petrov, CEO of ReinventlySynchron Announces First Successful Clinical Implantation of Stentrode