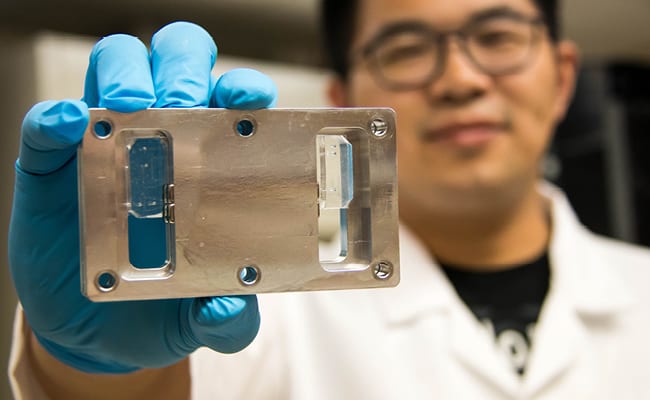 Researchers at the University of Georgia have developed a microfluidic chip to isolate circulating tumor cells (CTCs) from blood samples. Unlike other devices, this new chip uses magnetic microbeads to strip all the cells from the blood, leaving only the CTCs, in a technique the researchers have called “integrated ferrohydrodynamic cell separation”. The device is highly efficient and isolates almost all the CTCs in a blood sample (over 99%).

CTCs could allow clinicians to diagnose cancer. They also represent a mechanism underlying metastasis, and so are a therapeutic target in their own right. However, they are notoriously tricky to find in blood samples. “A typical sample of 7 to 10 milliliters of blood may contain only a few CTCs,” said Leidong Mao, a researcher involved in the study. “They’re hiding in whole blood with millions of white blood cells. It’s a challenge to get our hands on enough CTCs so scientists can study them and understand them.”

To address this, researchers have been developing numerous devices and techniques to isolate CTCs from blood samples. Typically, these devices attempt to isolate the CTCs themselves, akin to finding a needle in a haystack. This group of researchers has taken a different approach – move the haystack and leave the needle behind.

The technique involves eliminating everything in a blood sample except the CTCs. In an initial step the researchers prepare the blood sample for analysis by adding magnetic microbeads, which attach to white blood cells in the sample.

A blood sample streaming through the microfluidic device.

They then add the blood sample to the device, which is about the size of a USB drive. As the blood flows through tiny channels, magnets draw all the microparticle-loaded cells away into another channel, leaving cells that are not magnetized behind, including the CTCs.

“The first step is a filter that removes large debris in the blood,” said Yang Liu, another researcher involved in the study. “The second part depletes extra magnetic beads and the majority of the white blood cells. The third part is designed to focus remaining white blood cells to the middle of channel and to push CTCs to the side walls.”

The technique can extract over 99% of the CTCs from a blood sample, and so is highly efficient. “The success of our integrated device is that it has the capability to enrich almost all CTCs regardless of their size profile or antigen expression,” said Wujun Zhao, another researcher involved in the study. “Our findings have the potential to provide the cancer research community with key information that may be missed by current protein-based or size-based enrichment technologies.”

Via: University of Georgia…

vamtam-theme-circle-post
 Category Updates
While the COVID-19 pandemic has seen some countries respond well to the ongoing health crisis for their own populations, it has also – despite decades of increasing and...
Read More

Smartphone App Uses Phone Microphone to Hear Ear InfectionsCoordinate My Care publicly launched to give patients greater control