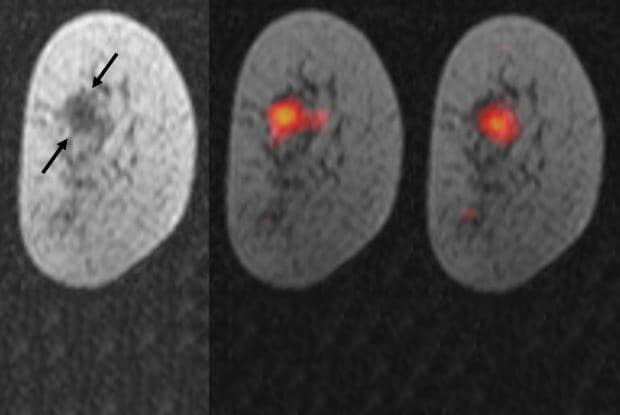 Current imaging methods that are used to spot tumors don’t provide much information about the rate of activity of the cells making up the diseased tissues. Breast cancer tumors, for example, are mostly classified into a few categories based on hormone receptor and HER2 expression.

Researchers at Cancer Research UK Cambridge Institute and the Department of Radiology at the University of Cambridge are now reporting in Proceedings of the National Academy of Sciences that they’ve used magnetized particles to image the actual metabolic activity of breast cancer tumors. This may provide a relatively accessible new way of categorizing tumors, allowing for more accurate decision making during diagnosis and subsequent treatment, saving lives in the process and minimizing unwarranted therapies.

The researchers magnetized carbon-13 pyruvate molecules by cooling them down to only one degree above absolute zero and using microwaves and magnetic fields. Once ready, the molecules can be warmed and dissolved in a solution that can be injected into patients.

“This is one of the most detailed pictures of the metabolism of a patient’s breast cancer that we’ve ever been able to achieve, said lead study researcher Kevin Brindle from the Cancer Research UK Cambridge Institute. “It’s like we can see the tumor ‘breathing’. Combining this with advances in genetic testing, this scan could in the future allow doctors to better tailor treatments to each individual, and detect whether patients are responding to treatments, like chemotherapy, earlier than is currently possible.”

The novel magnetic particles were tested on seven patients with different kinds and states of breast cancer. The researchers were able to see the rate of metabolism and where it was occurring more rapidly, helping to classify the tumors. The technology was even accurate enough to note differences in metabolic activity within individual tumors.

vamtam-theme-circle-post
 Category Updates
While the COVID-19 pandemic has seen some countries respond well to the ongoing health crisis for their own populations, it has also – despite decades of increasing and...
Read More

Abbott Infinity First Brain Stimulator to Target GPi to Treat Parkinson’sPortable Nanoplasmonic Imager Detects Sepsis Biomarkers