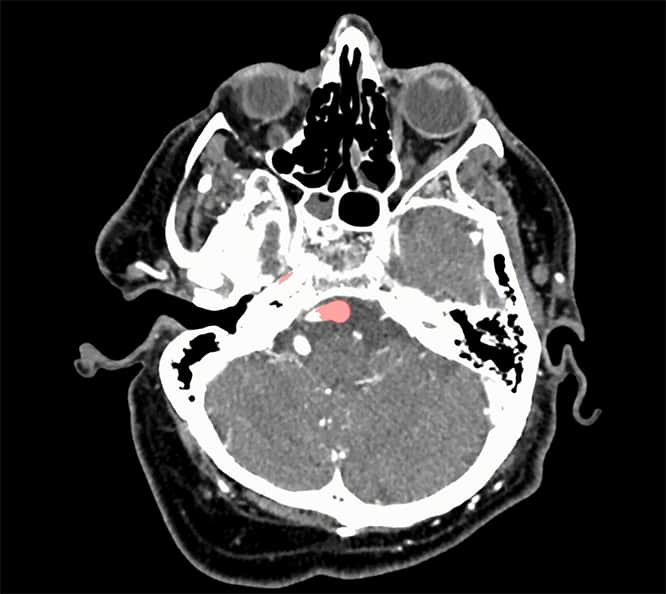 Researchers from Stanford University have developed a new AI tool, dubbed HeadXNet that detects brain aneurysms from computed tomographic angiography (CTA) scans. Their work, recently published in JAMA Network Open, demonstrates that their AI tool helped radiologists identify 6 more scans with aneurysm for every 100 scans already diagnosed with aneurysm. This is an exciting development for the millions of Americans who experience intracranial aneurysms, and can help improve detection and clinical outcomes.

Currently, about three percent of the American population will suffer from intracranial aneurysms at some point in their lives. CTA, a minimally invasive imaging method, is commonly used for diagnosis. Unfortunately, interpretation is time-intensive for neuroradiologists, and low agreement between physicians serves as an additional challenge. The researchers performed a study to see if a deep learning tool could help address these limitations.

The researchers first created a dataset of 611 labelled CTA scans, in which a radiologist identified the regions of the images with aneurysms. The system was trained with these, following which the algorithm is able to decide, for each voxel of a scan, whether or not it is part of an aneurysm. The algorithm’s conclusions are overlaid as a semi-transparent highlight on a scan.

The Stanford team performed a study with eight clinicians, evaluating 115 brain scans with or without aneurysms. Clinicians had access to medical histories, scans, and patient files. The only variable was whether or not the scan had been annotated by the deep learning algorithm. The researchers found not only an improvement in the “miss” rate, with clinicians identifying six more scans with aneurysm for every 100 scans, but they discovered that clinicians were more likely to agree on a specific diagnosis with each other using the deep learning annotations.

vamtam-theme-circle-post
 Category Updates
While the COVID-19 pandemic has seen some countries respond well to the ongoing health crisis for their own populations, it has also – despite decades of increasing and...
Read More

CorMatrix Cor PATCH for Repair of Broken Hearts Gets FDA ClearanceVirtual reality tool improves carers understanding of dementia