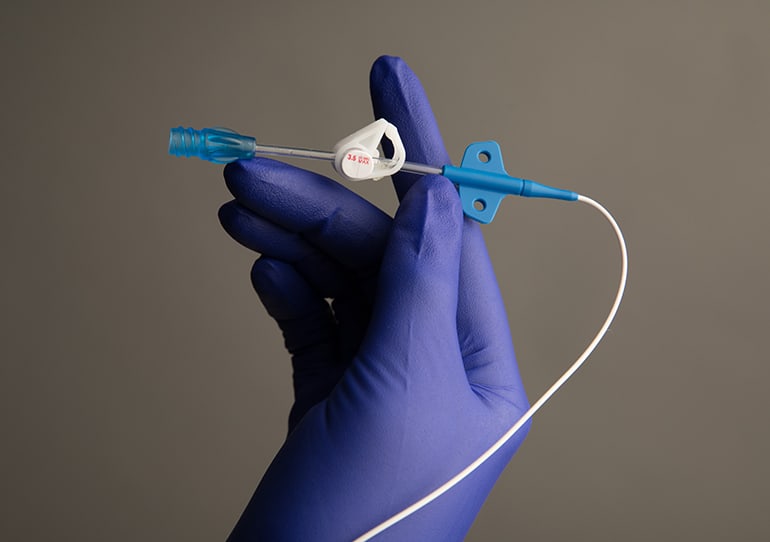 Access Vascular, based in Bedford, Massachusetts, won FDA clearance for the latest version of its HydroPICC anti-thrombogenic central line catheter. As with the original, which was cleared two years ago, the new device features Access’s unique “bulk-hydrophilic” material that prevents clogging by being rich in water while carrying a neutral surface charge. Proteins and other biomaterials tend not to stick to such surfaces and the material has been shown not to initiate a thrombosis cascade as it doesn’t seem to be recognized by the body as non-native.

HydroPICC’s latest iteration includes an improved insertion mechanism that makes it easier to operate and new features that make it a bit more intuitive and quicker to set up a line.

The device can be used for extended time periods and it can withstand having liquids moved through it, just like traditional polyurethane catheters.

“The importance of improving the biocompatibility of materials that reside within the intravascular space cannot be overemphasized. Despite attention to optimal site choice and catheter to vein ratios, patients often develop fibrin sheaths that inhibit catheter functionality. They also commonly develop venous thrombus, sometimes with associated blood stream infections, that use these depositions as basecamps for biofilm formation,” said Gregory J. Schears, MD, professor of anesthesiology in Rochester, Minnesota and medical advisor to Access Vascular, in a press release. “A material that could combat these issues has the potential to significantly improve vascular access throughout the body.”

vamtam-theme-circle-post
 Category Updates
While the COVID-19 pandemic has seen some countries respond well to the ongoing health crisis for their own populations, it has also – despite decades of increasing and...
Read More

VistaScan Ultrasound Probes for Your Smartphone Cleared by FDARESPMETER Opioid Overdose Detector Wins FDA Breakthrough Device Status