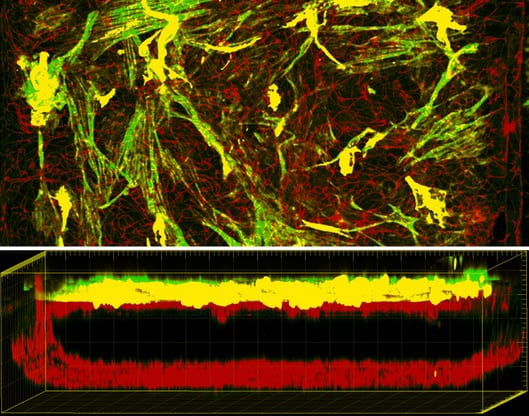 Researchers from the Wyss Institute at Harvard University have developed a new microfluidic lab-on-a-chip device that aims to more accurately model the complex biological properties of the blood-brain barrier (BBB). Their work, recently published in Nature Communications, demonstrates the device is able to mimic the highly selective drug and antibody uptake previously only seen within in vivo systems. This development can help advance drug discovery to treat brain diseases and potentially help improve understanding of conditions resulting from BBB dysfunction.

Prior in vitro models of the blood-brain barrier have been limited in a variety of ways. These have often stemmed from the limitations in the endothelial components of such devices, which are composed of a monolayer of induced pluripotent stem cells, guided toward becoming brain microvascular endothelial cells (iPS-BMVECs).

In order to make the induced pluripotent stem cells behave like natural BMVECs, the researchers noted a key observation that the BBB first forms in the developing brain in an oxygen limited environment (1-8%) before the circulatory system has developed. When they applied low oxygen to the iPS cells during differentiation, they found the cells ended up resembling native BMVECs more than iPS cells that were differentiated with normal oxygen levels (20%).

The team demonstrated that their process improved the fidelity of antibody and small molecule uptake, very similar to the selective uptake performed by the native blood-brain barrier. In a short study, they utilized the BBB chip to find a way to improve delivery of a cancer drug:

“When we specifically blocked the function of P-gp, a key endothelial efflux pump, we could substantially increase the transport of the anti-cancer drug doxorubicin from the vascular channel to the brain channel, very similarly to what has been observed in human patients,” said Tae-Eun Park, Ph.D., co-first author of the paper. “Thus, our in vitro system could be used to identify new approaches to reduce efflux and thus facilitate drug transport into the brain in the future.”

Exciting developments like these could help advance the standard of care for people who suffer from brain cancer and other diseases of the central nervous system.

Image : In the enhanced human BBB Chip, endothelial cells derived from induced human pluripotent stem cells in a development-inspired process, form a microvessel in the lower of two parallel microfluidic channels (lower images), while pericytes and astrocytes populating the upper channel connect to the microvessel across a dividing porous membrane. Credit: Wyss Institute at Harvard University

vamtam-theme-circle-post
 Category Updates
While the COVID-19 pandemic has seen some countries respond well to the ongoing health crisis for their own populations, it has also – despite decades of increasing and...
Read More

Millions budgeted for improved digital services left unspent, figures revealTime to cast your vote in the Digital Health Awards 2019