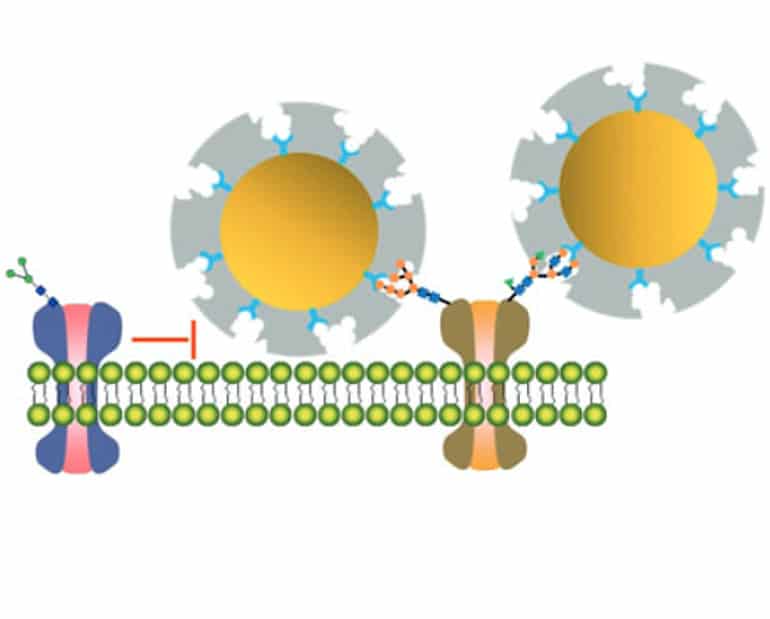 HER2 (human epidermal growth factor receptor 2) is a protein that is associated with some particularly aggressive forms of breast cancer. The presence of high concentrations of this protein seems to lead to the growth of tumors, so inactivating HER2 may help to stop the spread of certain strains of cancer in the body.

An existing technique involves introducing an antibody that can block HER2 from binding to other things, but now researchers at Nanjing University in China have developed a polymer nanoparticle that can bind to HER2 just as well as antibodies. These nanoparticles can halt the normal functionality of HER2 and reduce the number of new tumor cells that sprout. Their advantage is that, unlike antibodies, they’re cheap to manufacture, easy to handle, and can be kept chemically stable.

A press release from Wiley publishing explains some details:

Nanoparticles can be molecularly imprinted in that – to simplify – a polymerizable mixture is polymerized into nanospheres in the presence of the (bio)molecules they are supposed to recognize later. The (bio)molecules act as a kind of stamp, leaving nanoscopic “imprints” in the spheres. These then perfectly fit the molecules they were imprinted with and bind to them specifically. In contrast to antibodies, the nanospheres are easy and inexpensive to produce and are chemically stable.

For the imprinting process, the researchers use a special method (boronate affinity controllable oriented surface imprinting) that is particularly controllable and makes it possible to imprint using chains of sugar building blocks (glycans) as templates. Many proteins contain specific “sugar chains”. These are unique, like a protein fingerprint. The researchers used this kind of glycan from the extracellular end of the HER2 proteins as their “stamp”. This allowed them to produce imprinted nanoparticles that specifically recognize HER2 and selectively bind to it, inhibiting the dimerization. They were thus able to significantly reduce the multiplication of tumor cells in vitro and the growth of tumors in mice. In contrast, healthy cells were essentially unaffected.

Study in journal Angewandte Chemie: Inhibition of HER2‐Positive Breast Cancer Growth by Blocking the HER2 Signaling Pathway with HER2‐Glycan‐Imprinted Nanoparticles

vamtam-theme-circle-post
 Category Updates
While the COVID-19 pandemic has seen some countries respond well to the ongoing health crisis for their own populations, it has also – despite decades of increasing and...
Read More

ProFound AI for 2D Mammography Cleared in Europe to Spot Potential Breast TumorsPancreas on a Chip to Study Causes and Treatments of Diabetes