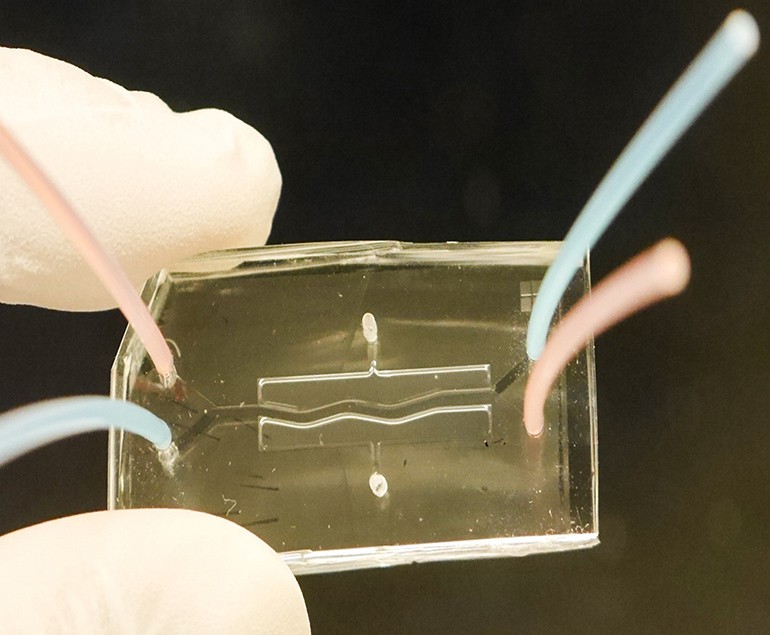 Dysfunction of the pancreas is related to a number of diseases, most famously diabetes. Conditions such as cystic fibrosis-related diabetes (CFRD), are particularly difficult to study in a laboratory setting, but researchers at Cincinnati Children’s Hospital Medical Center have now developed a device, and an accompanying methodology, to mimic the functionality of the human pancreas. The technology is already being used to answer important questions about how CFRD comes about and will certainly help in solving other medical mysteries.

The team’s microfluidic device has two chambers separated by a porous membrane which permits the cells that live on both sides of it, namely pancreatic ductal epithelial cells and pancreatic islets, to chemically interact. The cells were obtained from surgical patients, but in the future patients may be able to benefit by having their own cells studied to decide which treatment path to take.

As the two types of cell were cultured within the microfluidic device, they grew and formed into pancreatic organoids. Together, and thanks to the membrane, these behaved much like an actual pancreas, demonstrating intracellular communication and performing fluid exchanges.

The Cincinnati Children’s team also went ahead and used their device to halt the functionality of the CFTR gene within the organoids. CFTR is the gene that causes cystic fibrosis. This led the system to begin exhibiting characteristics similar to those found in patients with CFRD, demonstrating that the CFTR gene has a central role in managing the production of insulin.

Further use of the device will certainly reveal new information about the pancreas and how different therapies can help to heal its dysfunctions.

vamtam-theme-circle-post
 Category Updates
While the COVID-19 pandemic has seen some countries respond well to the ongoing health crisis for their own populations, it has also – despite decades of increasing and...
Read More

New Nanoparticles to Stop Growth of HER2-Positive Breast CancerWithings Releases Two Fashionable Wireless Blood Pressure Monitors