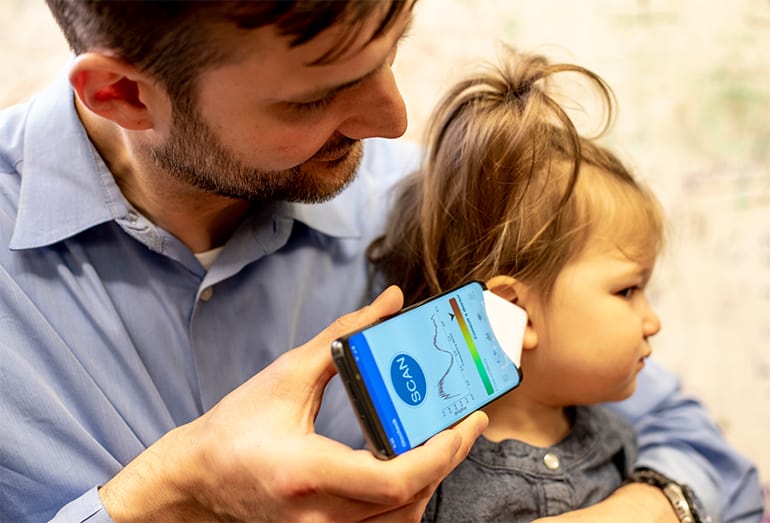 Researchers at the University of Washington have developed a smartphone app that can detect ear infections. By holding the phone and a small paper cone close to the ear of a patient, a clinician can use the app to diagnose an infection. The app emits a sound through the phone’s speaker, and the microphone picks up the noise that is reflected back from inside the ear. By analyzing the reflected sound, the app can predict the likelihood that there is a buildup of fluid behind the eardrum, a sign of infection.

Ear infections are relatively common in children, and can be difficult to diagnose as the symptoms are sometimes vague, and children may find it difficult to describe them. Many infections result from a buildup of fluid behind the eardrum, which can become infected. The condition can be painful and can make it difficult to hear.

At present, specialists can diagnose a buildup of fluid behind the eardrum using specialized equipment that uses puffs of air or acoustics. However, diagnosing such common infections in a community doctor’s surgery or even at home would be preferable. To bring this option closer to reality, the research team developed a smartphone app to perform this task.

“Fluid behind the eardrum is so common in children that there’s a direct need for an accessible and accurate screening tool that can be used at home or clinical settings,” said Sharat Raju, a researcher involved in the study. “If parents could use a piece of hardware they already have to do a quick physical exam that can say ‘Your child most likely doesn’t have ear fluid’ or ‘Your child likely has ear fluid, you should make an appointment with your pediatrician’, that would be huge.”

The system involves a smartphone and a small paper cone. A user holds the cone on the outer ear, and then holds the microphone/speaker end of the smartphone up to the cone. The app emits a noise, which sounds like a bird chirping, through the cone. The sound waves bounce off the ear drum and then return to be picked up by the phone’s microphone.

“It’s like tapping a wine glass,” said Justin Chan, another researcher involved in the study. “Depending on how much liquid is in it, you get different sounds. Using machine learning on these sounds, we can detect the presence of liquid.”

See a video about the system below:

Via: University of Washington…

vamtam-theme-circle-post
 Category Updates
While the COVID-19 pandemic has seen some countries respond well to the ongoing health crisis for their own populations, it has also – despite decades of increasing and...
Read More

Synthetic Proteins Designed to Halt Growth of CancersMagnetic Beads Strip Blood Samples to Allow Circulating Tumor Cell Isolation