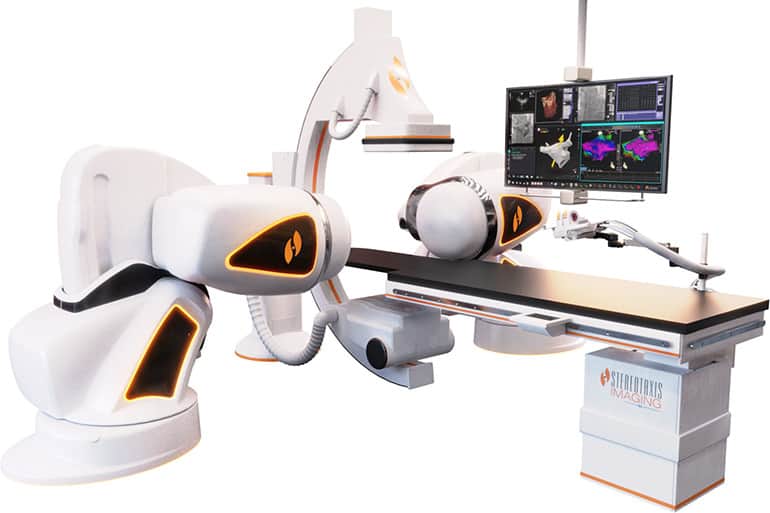 Stereotaxis, with offices in St. Louis, MO and the Netherlands, has won FDA clearance for the Genesis RMN System, a new generation of the company’s robotic navigation systems for the delivery of magnetic ablation catheters to address cardiac arrhythmias. The system can access all chambers of the heart and coronary vasculature, and can also be used within the neuro and peripheral vasculature.

The company’s robotic magnetic navigation (RMN) technology allows for precise control of a catheter tip as it is guided toward ablation target sites within the heart. The firm claims that over 100,000 patients have already been treated with its RMN systems.

Some of the advancements of the new Genesis RMN System include faster operation, a smaller, lighter footprint, as well as greater procedural flexibility to address more challenging cases. Smaller magnets, which rotate around their center of mass to control the position of the catheter, are a big factor in making all this possible.

Stereotaxis says that “[a]cross a broad range of navigational routines, the Genesis System is 70% to 80% faster than its predecessor.” Because the system is also smaller, it allows easier access to patients, while the patients themselves don’t feel as encapsulated by the machine.

The Genesis RMN is intended to be used with the Stereotaxis Imaging Model S X-ray system that features digital flat-panel detection.

vamtam-theme-circle-post
 Category Updates
While the COVID-19 pandemic has seen some countries respond well to the ongoing health crisis for their own populations, it has also – despite decades of increasing and...
Read More

Augmedix Uses AI and Remote Scribes to Improve Clinician Documentation: Interview with Founder Ian ShakilUW Medicine CIO’s advice: prepping IT systems for COVID-19