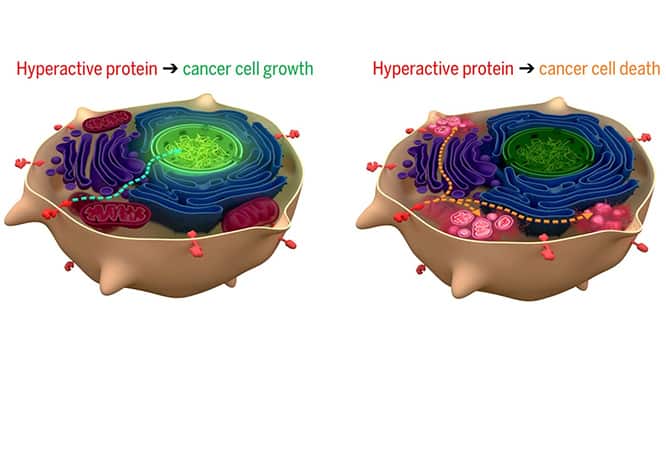 Stanford University scientists have developed a novel approach to halting the growth of cancer cells while preserving normal function in healthy cells. The research was published in journal Science, and though it was so far conducted only on groups of cancer cells outside a body, the findings are incredibly promising.

The new approach focuses on manipulating signaling pathways within cellular membranes that are involved in the growth of cells. Receptor proteins within membranes of cancer cells are often mutated or expressed in higher than normal concentrations, resulting in them effectively being “always on”. This leads to cancer cells growing out of control, even in the absence of the normally necessary chemical signals.

The team targeted the EGFR and HER2 receptors that are involved in the reproduction of breast, brain, and lung cancers. They engineered two synthetic proteins, the first of which is active when around the “always on” signals produced by cancer cells. The second protein, when activated, acts to initiate the expression of genes that begin the process of cellular death.

An announcement from Stanford University explains:

[Hokyung Chung, PhD, the lead author of the study,] and her colleagues designed a synthetic protein consisting of two natural proteins fused together — one that binds to active ErbB receptors [such as EGFR and HER2] and another that cleaves a specific amino acid sequence. They then engineered a second protein that binds to the inner surface of the cell membrane and contains a customizable “cargo” sequence that can carry out specific actions in the cell. When the first protein binds to an active ErbB receptor, it cuts the second protein and releases the cargo into the interior of the cell.

“When the receptor protein is always on, as it is in cancer cells, the released cargo protein accumulates over time,” Chung said. “Eventually enough accumulates to have an effect on the cell. In this way, the system produces an effect only in cancer cells, and we can convert the always-on state of the receptor into different outcomes through the choice of cargo protein.”

So far this was tried only in lab samples of various cells, so it’s not clear whether there will be any side effects from this kind of therapy. The team did compare the approach to chemotherapy and a medication that blocks ErbB, showing that the new approach is a lot more selective over chemo and the drug paclitaxel that were indiscriminate in killing both healthy and cancer cells.

vamtam-theme-circle-post
 Category Updates
While the COVID-19 pandemic has seen some countries respond well to the ongoing health crisis for their own populations, it has also – despite decades of increasing and...
Read More

NHS organisations to be offered discounted access to cloud servicesSmartphone App Uses Phone Microphone to Hear Ear Infections