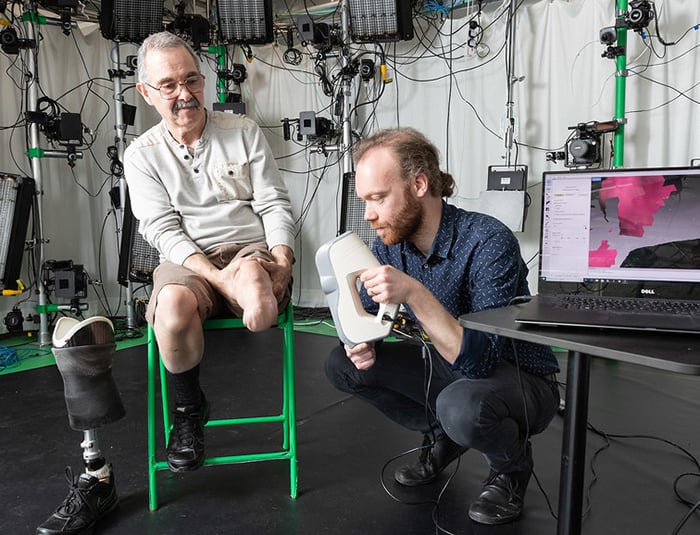 Researchers from the University of Bath in the UK have developed a new method for creating highly accurate and comfortable prosthetic liners. Their work demonstrates that by using a state-of-the-art scanner, along with a new manufacturing technique, they can create prosthetic liners out of soft neoprene materials. This is an exciting development for those that use prosthetic limbs, and can one day help improve comfort and use of prostheses.

After an amputation, an individual’s residual limb can change in shape and size during the healing process, which can last as long as 12 to 18 months. These changes lead to the prosthetic liner, which goes between the residual limb and the prosthetic device, to fit poorly. Poorly fitted liners can result in tissue damage, as well as pain and discomfort, and it is not uncommon for patients to abandon using prostheses for these reasons. To address this challenge, the Bath research team sought to develop new, highly accurate and soft prosthetic liners.

Their new approach leverages state-of-the-art scanners to capture the 3D shape of the residual limb. The shape is used to create a digital model of the residual limb, which in turn is used to design the personalized prosthetic liner. The liner is manufactured from neoprene, the same material used in wetsuits, using a cryogenic machining technique, which does not require making molds, a slow and labor-intensive process.

The researchers demonstrated the power of this approach with a case study, developing prosthetic liners for a patient named John Roberts, who had a lower limb amputation. John experienced his residual limb changing shape after amputation, which caused it to blister and get irritated. He used to wear multiple socks along with a silicone liner. Now, he can simply wear the single neoprene liner, since it fits so well. This results in a more comfortable fit and allows him to fit the prosthetic limb much faster, in case of an emergency.

The researchers also inserted pressure sensors in the prosthetic limb, and studied John’s gait with and without the system. They found the new liner significantly reduces the pressure on the residual limb, making it more comfortable to walk.

Via: University
of Bath

vamtam-theme-circle-post
 Category Updates
While the COVID-19 pandemic has seen some countries respond well to the ongoing health crisis for their own populations, it has also – despite decades of increasing and...
Read More

PhotoniCare Looks Behind Ear Drums to Help Diagnose Ear InfectionsTiny Implant Driven by Bluetooth Delivers Drugs Inside Body