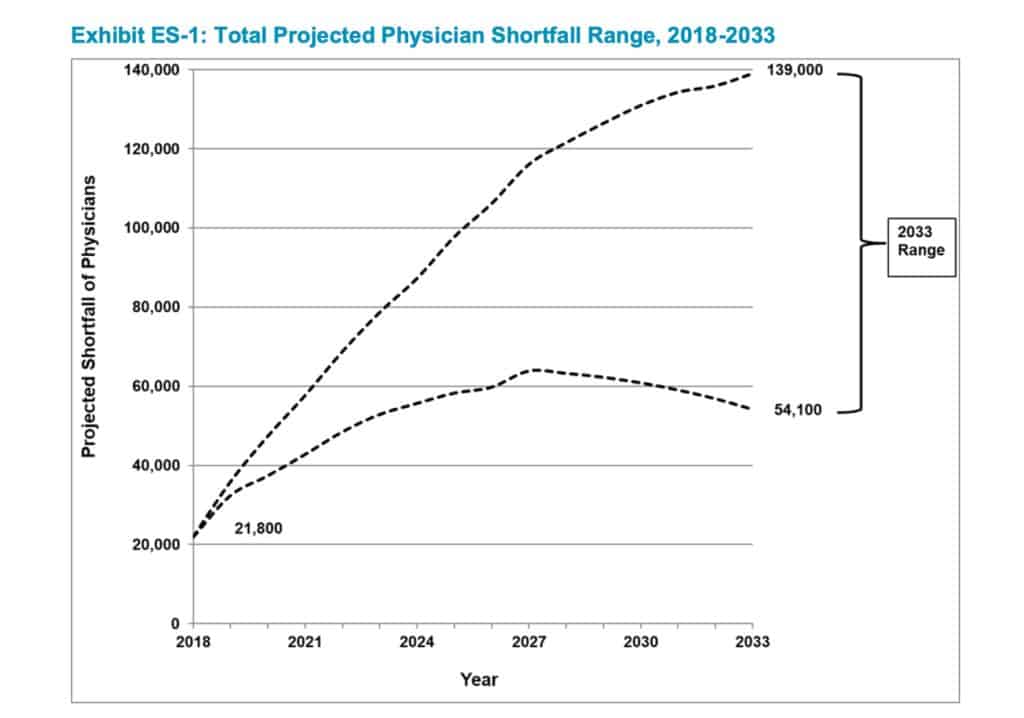 The Association of American Medical Colleges (AAMC) has released a report, The Complexities of Physician Supply and Demand: Projections from 2018 to 2033, predicting a substantial future shortfall of physicians. The AAMC represents medical schools and teaching hospitals and offers services to its member institutions including medical education data. Trying to anticipate future physician supply and demand is in their wheelhouse. They conclude:

We continue to project that physician demand will grow faster than supply, leading to a projected total physician shortage of between 54,100 and 139,000 physicians by 2033.

Significant contributors to growing demand include early retirement forced by COVID-induced burnout as well as an aging physician population.

A large portion of the physician workforce is nearing traditional retirement age, and supply projections are sensitive to workforce decisions of older physicians. More than two of five currently active physicians will be 65 or older within the next decade. Shifts in retirement patterns over that time could have large implications for physician supply. Growing concerns about physician burnout, documented in the literature, suggest physicians will be more likely to accelerate than delay retirement. On the other hand, economic uncertainty and any detrimental effect on physician wealth could contribute to delaying retirement.

The problem with the predicting physician supply and demand

Here’s where we run into trouble predicting physician demand.

We can expect medicine to continue its progressive march toward personalized, precision care that is predictive and preemptive. We can see that:

Given the pace of change and our lack of understanding of the end-point we don’t know what doctors will actually be doing in the future. So it’s impossible to predict how many we’ll need. This is the challenge with prognostication.

It’s clear that technology is getting better at what we used to do as physicians. In 2016 Vinod Khosla in his 2016 20-percent doctor included: Speculations and musings of a technology optimist suggested that Technology will reinvent healthcare as we know it. It is inevitable that, in the future, the majority of physicians’ diagnostic, prescription and monitoring, which over time may approach 80-percent of total doctors’/internists’ time spent on medicine, will be replaced by smart hardware, software, and testing.

The gig economy, AI, robotics, 3D printing, advanced imaging are a few of Khosla’s forces that will retool the concept of the doctor. And what we typically associate with physician deliverables will evolve as services and processes. These changes will, in turn, reshape the work of a doctor. While AAMC is trying to predict how many physicians we’ll need to get the work done, they’re not asking starting with the most important question: What should/will that work be?

This question of what doctors will actually do leads to a more pressing issue for the AAMC: How do we train doctors for the year 2033?

Technology in medicine complicates predictions about physician supply and demand. Because as more of what we once did at the bedside gets offset to diagnostic technology, it becomes easier for someone who is not a doctor to fill the role of healer. As the report suggests, advanced practitioners are expected to weigh significantly in future physician workforce considerations. I suspect that this reality is underrepresented in the report.

For those who don’t work in the clinical space, the emerging role of the advance practitioner can be illustrated with this example. There was a time when the experience and wisdom that came from education and experience allowed a doctor to look at a child’s throat and make a reasonable clinical assessment of strep throat. Point of care testing with the rapid strep test has disrupted that process. It allows anyone who can read the output of the test to make the diagnosis. Deep experience in the face of this technology becomes less important when the diagnosis is not dependent on a human.

This is why the future of providers is strong.

The future of physicians? It depends on how we adapt, adjust and redefine ourselves as a profession. Physicians can take the future into their own hands or leave it to the social and technological forces currently underway. But this is a bigger discussion for another time.

The strep situation is a simple example of a broader, creeping process underway as part of medicine’s industrialization.

Projections as a parlor game

The problem with predicting physician supply and demand begins with our habit of trying to see the future through a 20th century lens. The perceptual bias of institutional medicine sees the future physician as a version of the 20th model — the future as an extension of the past. We fall prey to Amy Webb’s paradox of the present. We have a hard time seeing the future because we lack a shared point of reference rooted in our present circumstances.

Consequently medicine is changing faster than its institutions can keep up. And this concept of physician-role-as-moving-target is likely our new normal. According to Kevin Kelly in The Inevitable we are in a state of perpetual becoming:

The problem with constant becoming (especially in a protopian crawl) is that unceasing change can blind us to its incremental changes. In constant motion we no longer notice the motion. Becoming is thus a self-cloaking action often seen only in retrospect. More important, we tend to see new things from the frame of the old. We extend our current perspective to the future, which in fact distorts the new to fit into what we already know. That is why the first movies were filmed like theatrical plays and the first VRs shot like movies. This shoehorning is not always bad. Storytellers exploit this human reflex in order to relate the new to the old, but when we are trying to discern what will happen in front of us, this habit can fool us.

The future of medicine is not static. Medical life in the future will be a series of real-time upgrades. In 2018 I riffed on Kelly’s related insight that we will all be endless newbies. The faster we become the harder it is to predict what we will be.

While he wasn’t referring to the organizational leadership of the nation’s medical schools Nassim Taleb in The Black Swan had it right:

I find it scandalous that in spite of the empirical record we continue to project into the future as if we were good at it, using tools and methods that exclude rare events. Prediction is firmly institutionalized in our world. We are suckers for those who help us navigate uncertainty, whether the fortune-teller or the “well-published” (dull) academics or civil servants using phony mathematics.

Establishing a healthy relationship with uncertainty may represent a better strategy for healthcare leaders going forward.

If you like The Problem with Predicting Physician Supply and Demand you might like our 33 charts MD Future Archives. It’s everything written here on the future of medicine. In fact, every post has carefully chosen tags to help you to identify related reading.

Links to Amazon are affiliate links.

vamtam-theme-circle-post
 Category Updates
While the COVID-19 pandemic has seen some countries respond well to the ongoing health crisis for their own populations, it has also – despite decades of increasing and...
Read More

Boston Sci’s Lux-Dx Smart Implantable Arrhythmia Detector FDA ClearedGlove Interprets Sign Language in Near Real Time