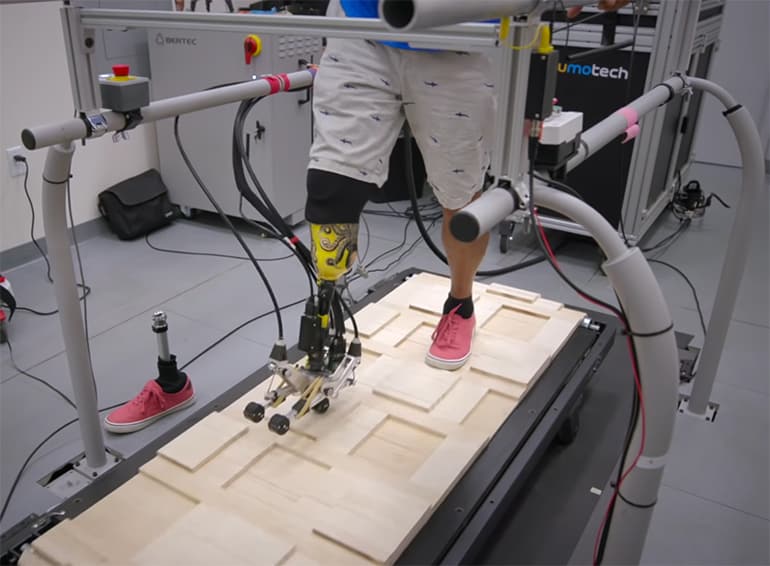 Researchers at Stanford have developed an unusual tripod-like prosthetic foot equipped with sensors to monitor movement and the surrounding environment. The device provides more stability for users when walking on rough terrain. The research team designed the prototype device using a prosthetic emulation system that allowed them to rapidly modify and optimize their designs, without having to go through a lengthy manufacturing process.

Approximately 500,000 people in the US have had a lower limb amputation. Such people are at increased risk of falls, and current prostheses are difficult to use safely on uneven or rough terrain. These factors can contribute to decreased mobility and social engagement, which can lead to reduced quality of life.

New prostheses that can lower the risk of falls and increase the range of terrains that amputees can walk on could enhance people’s safety and quality of life. This goal inspired the Stanford researchers to develop a new type of prosthetic foot, which shifts pressure between three contact points to maximize stability on uneven ground.

The tripod includes two forward facing “toes” and a rear facing “heel”. Onboard sensors allow the robotic system to monitor movement and the terrain, while motors let it move to respond to these factors and maximize stability. This is similar to how someone can flex their ankle or move their toes to keep their balance on rough ground.

One of the major challenges in designing prostheses is making them lightweight and inexpensive. At present, a lengthy design and manufacturing process is a major hurdle to achieving this efficiently. “First you have to come up with an idea and then you prototype it and then you make a nice machined version,” said Vincent Chiu, a researcher involved in the study. “It could take several years, and most of the time you find out that it doesn’t actually work.”

Chiu and his colleagues avoided this by using a prosthetic emulation system in the lab, meaning they could tweak their design rapidly without worrying about it being ready for real-world use. “Prosthetic emulators allow us to try lots of different designs without the overhead of new hardware,” said Steven Collins, another researcher involved in the study. “Basically, we can try any kind of crazy design ideas we might have and see how people respond to them, without having to build each idea separately.”

See a video about the device and design process:

vamtam-theme-circle-post
 Category Updates
While the COVID-19 pandemic has seen some countries respond well to the ongoing health crisis for their own populations, it has also – despite decades of increasing and...
Read More

UK’ first maternity record system launched in BirminghamGP at Hand’s primary care network application to be ‘considered’