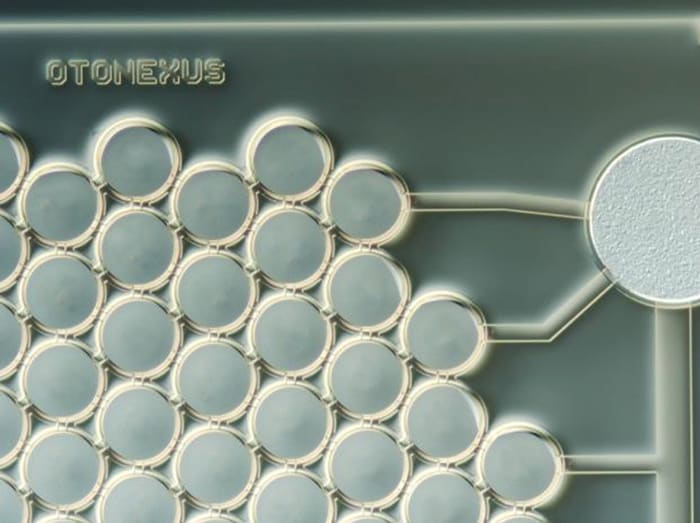 Diagnosing infections of the middle ear is prone to a great deal of subjectivity. Antibiotics being the typical treatment option, way too many patients are treated who are actually not infected. This can result in the development of antibiotic-resistant bacteria and a host of other problems.

Researchers at the Fraunhofer Institute for Photonic Microsystems IPMS in Germany have developed a new ultrasound transducer that can be integrated into existing otoscopes to provide a clearer view into the middle ear and let physicians better diagnose infections within. The Fraunhofer team has now partnered with OtoNexus Medical Technologies, a company based in Seattle, Washington, to embed their transducer into an otoscope and to see if it works in a clinical trial.

Conventional otoscopes provide a visual view into the ear, but they can’t see behind the ear drum. Secondary signs of infection are usually used to make a diagnosis, but this leads to nearly half of all cases being diagnosed improperly. “The classic otoscope is an optical system and hasn’t changed in decades,” explains Dr. Sandro Koch, a physicist at Fraunhofer IPMS, in a press release. “But when fitted with our ultrasound transducer, which is both a transmitter and receiver, it develops new functions.”

The new transducer uses air-coupled ultrasound to penetrate behind the ear drum to reveal whether there’s excessive fluid there and even characterize its consistency. This method can help clinicians to not only spot an infection, but also identify how far it has progressed.

The transducer, dubbed CMUT (capacitive micromachined ultrasonic transducer), is cheap to produce and can be miniaturized so that it is much smaller than existing ultrasound technologies. It works thanks to a capacitor with two electrodes that have nothing but air between them. One of the electrodes is flexible and is used to transmit ultrasonic signals. The returning ultrasound waves hit a tiny membrane that is used to generate an electric current that holds all the data needed for the system to generate an image.

The technology is already being trialed with the hope that soon physicians will be better able to diagnose common, but poorly treated, infections of the middle ear.

vamtam-theme-circle-post
 Category Updates
While the COVID-19 pandemic has seen some countries respond well to the ongoing health crisis for their own populations, it has also – despite decades of increasing and...
Read More

Magnetically Controlled Microbots for Drug Delivery and Hyperthermia Therapy in CancerLight Powered Robot Made from Hydrogel to Operate Inside Body