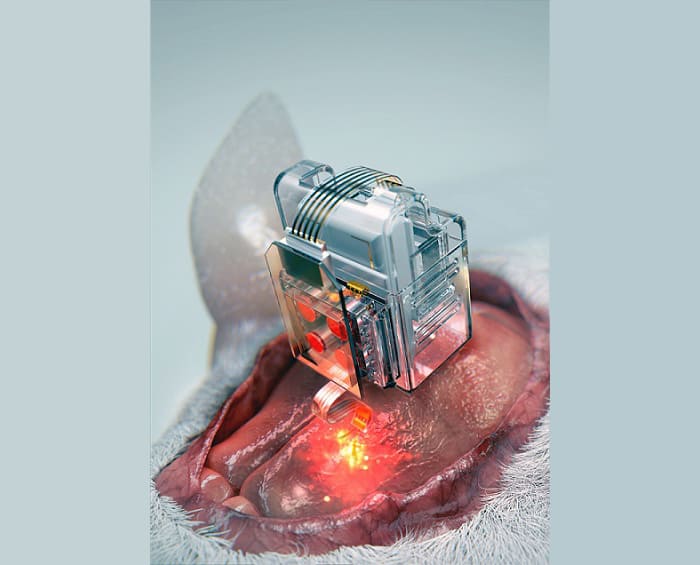 Optogenetics is a quickly evolving field that allows scientists to activate specific neurons using bursts of light. The technique may help to uncover the basis of neurological diseases and how to tame them. Using optogenetics to assess how different drugs affect the central nervous system may offer a powerful new scientific tool.

To that end, scientists at KAIST, South Korea’s national research university, created a wireless neural implant that can deliver multiple drugs and simultaneously activate neurons specially modified for optogenetics. The device features a Bluetooth transmitter, allowing the researchers to control it using a smartphone.

The device, attached directly to the heads of lab mice and protruding through the scalp, has multiple chambers that accept cartridges containing drugs, which can be switched out at any time for other drugs. The release of the drugs can be controlled and photostimulation applied as necessary.

The researchers were able to manipulate the movement of the mice in the study using both drugs and by activating specific neurons using optogenetics. Because the device was designed for long term studies, it performed continuously for more than a month.

vamtam-theme-circle-post
 Category Updates
While the COVID-19 pandemic has seen some countries respond well to the ongoing health crisis for their own populations, it has also – despite decades of increasing and...
Read More

New Device Supports Dialysis FistulasSeraph 100 Blood Filter For Blood Stream Infections Cleared in Europe