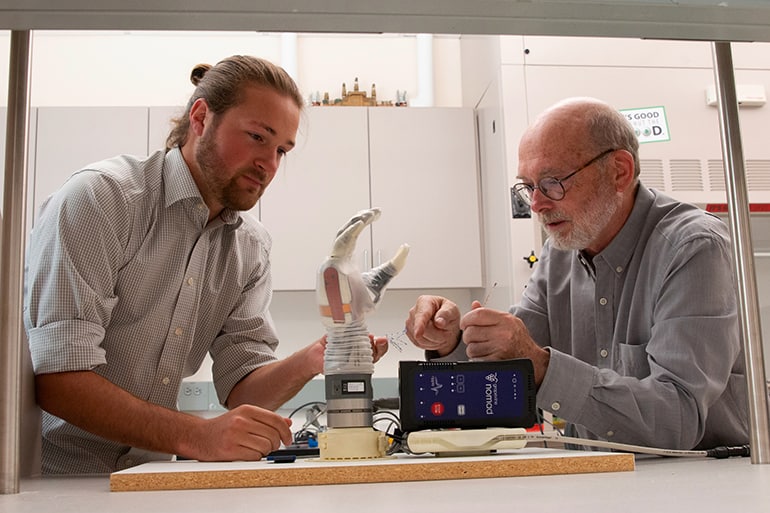 For prosthetic arms to really work well, they must have the ability to sense the things they’re touching. The actions involved in grabbing a can of sardines, a fresh egg, or a plum at a grocery store are very different. The fingers of the hand have to squeeze just the right amount so as to have a confident grasp on the object without making puree out of it.

Now, researchers at the University of Utah have managed to give the high-tech LUKE Arm the sense of touch that it’s been missing.

The team relied on the Utah Slanted Electrode Array, a device developed at the University, to interface with the user’s nervous system. The array, designed to be implanted into the forearm, features 100 microelectrodes that can read electric signals in nearby nerves. While this device has been in existence for over a decade, it has allowed the researchers in this latest study to deliver very specific signals to the brain, modeled on how the body naturally generates them, that give the user of the arm tactile sensations.

“We changed the way we are sending that information to the brain so that it matches the human body. And by matching the human body, we were able to see improved benefits,” said Jacob George, one of the researchers, in a press release. “We’re making more biologically realistic signals.”

One of the volunteers in the study, an amputee, was able to use the LUKE Arm to pick up eggs without breaking them. He was also able to pluck grapes from a bunch without juicing them and even hold his wife’s arm gently while feeling her grasp.

“Just providing sensation is a big deal, but the way you send that information is also critically important, and if you make it more biologically realistic, the brain will understand it better and the performance of this sensation will also be better,” said Gregory Clark, the lead researcher of this project.

The team recorded signals from an arm of a primate and used those as a foundation to generate signals from the LUKE Arm. Combining sensors on the prosthetic with the signal generation system and the implanted electrode array led to the study volunteers being able to sense with their prostheses quite well.

Here’s a short video from the University of Utah about the prosthetic, including video of one of its users plucking grapes from a bunch:

vamtam-theme-circle-post
 Category Updates
While the COVID-19 pandemic has seen some countries respond well to the ongoing health crisis for their own populations, it has also – despite decades of increasing and...
Read More

New Biomaterial Improves Brain Cancer Survival in RatsDevice for Opioid Overdoses Releases Naloxone Automatically