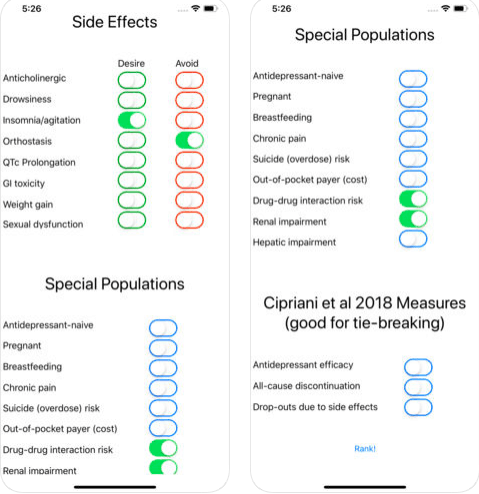 Mental health conditions are exceedingly common and costly in the U.S. medical system. Recent statistics from the Centers for Disease Control (CDC) and Prevention estimate that they account for 60 million visits to primary care and 6 million ER visits annually. Depression alone accounts for more than 10% of all primary care visits. These conditions result in a sobering 44,000 suicides per year in the U.S.

Screening for such conditions is commonly performed in most primary care practices with supporting recommendations from the United States Preventive Services Task Force (USPSTF) for conditions such as depression, alcoholism, etc. The treatment of depression is critical in helping to prevent ER visits, hospitalizations, and suicides. Evidence of depression is robust and typically involves cognitive behavioral therapy (or similar), antidepressants, or both. With thousands of published articles on the topic, how is the busy provider to select the “best antidepressant” for a given patient? The Agency for Healthcare Research and Quality (AHRQ) has performed and summarized much of this data as part of Effective Health Care Program. Their and others’ via systematic reviews, meta-analyses, network meta-analyses, clearly demonstrate the benefits of antidepressants and suggest based on patient factors as well as medication factors which drug(s) may best suit a particular patient.

An enterprising 4th year psychiatry resident at the University of Southern California, Theodore Huzyk, MD, has taken these data along with tables from UpToDate to create an antidepressant selector calculator. The app combines patient factors and drug side effects with overall results from the medical literature to create a unique list of drug options based on user input. The app ranks the “best options” down to the “worst options” and can be easily modified using toggles in the calculator. Although not meant to replace clinical judgement and current guidelines, the app can help guide patient-centered decision making.

Evidence-based medicine
The app utilizes data from two network meta-analyses and the AHRQ comparison articles to create an antidepressant calculator. The provider inputs patient data and/or side effects of medications to avoid or desired and the app creates a customized list of antidepressant options. Whether or not this is better than “standard clinical practice” is highly debatable. Some of the best options would not truly be first line (TCA’s/MAOI’s) or are not available in the U.S. — agomelatine, for example.

Who would benefit from this App?
Students, residents in mental health fields, primary care providers or any provider who prescribes antidepressants.

Dislikes
o The interface is nothing fancy and answers a bit clumsy (pregnancy data is not correct/consistent with safety guidelines, for example).
o Some of the evidence about the articles on which the app is based is difficult to find.
o Not available for Android.

Overall
The Antidepressant Proposer takes several existing network meta-analyses on choosing the “best” antidepressant for a given patient and creates a simple-to-use calculator. The app was designed by a 4th-year psychiatry resident to help other mental health providers, but could also be easily used in primary care. Although the app doesn’t have a slick interface, it is easy to use and provides evidence-based information on antidepressant selection. I am concerned about some of the answers provided for certain groups such as pregnancy.

User Interface
o 4.5 stars
Easy to use interface with readily available results, but somewhat difficult to view/interpret based on the text/font of the calculator that proposes the antidepressant.

Multimedia Usage
o 4.0 stars
contains several links to the UpToDate article which cites the articles on which the app is based. Would prefer links to the original source articles and not to UpToDate.

Real World Applicability
o 4.0 stars
This app has a noble goal of utilizing the best available evidence along with the pro’s/con’s of each antidepressant to create a list of the best antidepressant options for a given patient. However, many providers will likely stick to their tried-and-true / and not necessarily change practice especially when TCAs and MAOIs top the list of some searches. I will continue to try it in practice especially for patients with a more complicated medical/psychiatric history.

vamtam-theme-circle-post
 Category Updates
While the COVID-19 pandemic has seen some countries respond well to the ongoing health crisis for their own populations, it has also – despite decades of increasing and...
Read More

Physician Passion as a Professional CategoryKeep Going by Austin Kleon – A Manifesto for Life and Balance