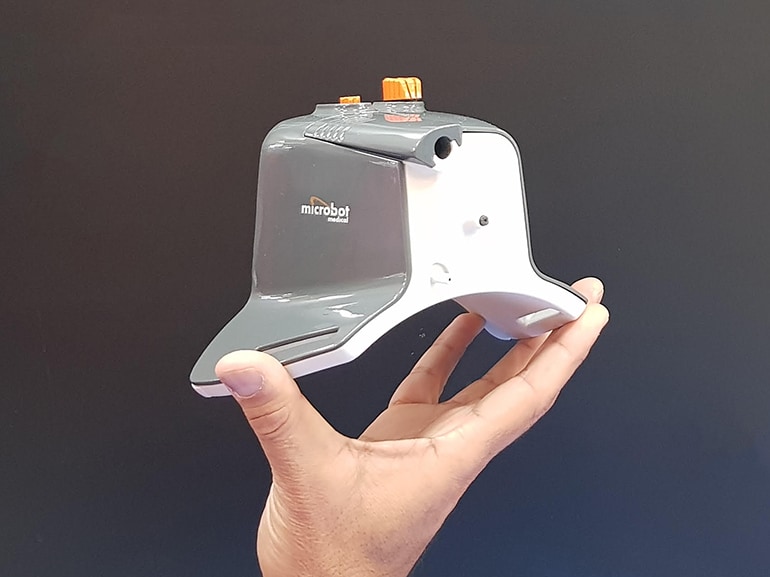 Microbot Medical, a company with offices in Massachusetts and Israel, is about to release the world’s first fully disposable endovascular surgical robot. The LIBERTY device is intended for use in a variety of cardiovascular, neurovascular, and peripheral vascular procedures, manipulating catheters in a fly-by-wire way.

Since it can be operated remotely, clinicians can be kept at a safe distance from radiation emitted by fluoroscopes, and at the same time the system makes endovascular procedures less straining to perform for physicians who would otherwise have to stand over the surgical table and manually steer the catheters.

The company touts the product’s “One & Done” capability so that one product is used per procedure and there aren’t multiple disposable items to manage.

“I believe LIBERTY will be welcomed by the interventional community due to its clinical and technical benefits in various subspecialties, such as neurovascular, cardiovascular and peripheral vascular interventions,” said Dr. Eyal Morag, Chairman of Radiology and Nuclear Medicine at Assuta Ashdod Medical Center in Israel. “The system set up is easy and straightforward, and it offers intuitive remote operation capabilities. These features are designed to reduce radiation exposure and eliminate physical strain on the physicians. Lastly, I believe it will democratize vascular procedures by shortening the physician’s learning curve.”

“LIBERTY is set to revolutionize the way surgical robotics are being used in endovascular procedures, by eliminating the need for capital equipment, reducing radiation exposure and aiming to streamline the use of disposables during these complex procedures,” said Harel Gadot, CEO, President, and Chairman of Microbot. “In addition, with LIBERTY’s remote operation as well as its “One & Done” capabilities, we believe it has the potential to be the first system to democratize endovascular interventional procedures.”

vamtam-theme-circle-post
 Category Updates
While the COVID-19 pandemic has seen some countries respond well to the ongoing health crisis for their own populations, it has also – despite decades of increasing and...
Read More

TULA System for Awake Ear Tube Placement FDA ApprovedThe Limits of Twitter for Debate