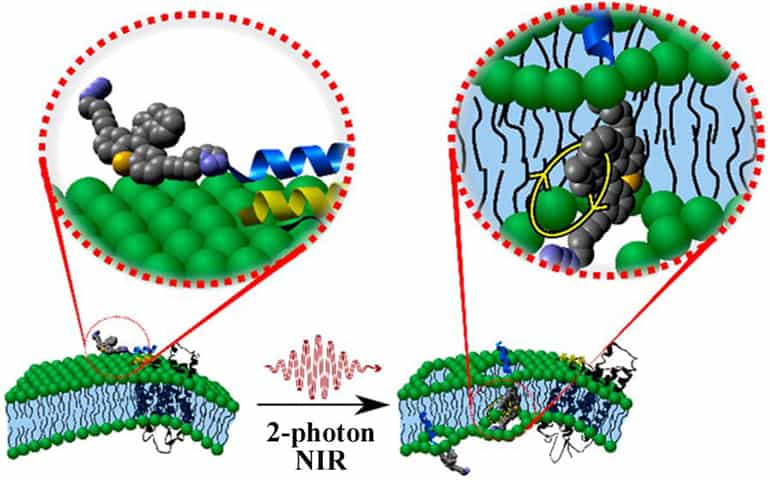 A couple of years ago a team of U.S. and U.K. scientists came up with a way of making molecular motors that can drill through cancer cells, destroying them in the process. The researchers, from Rice University, Durham University, and North Carolina State University, used an ultraviolet (UV) light source to energize these motors, but such light is dangerous and can cause a host of unintended consequences.

Now, the same team has managed to use a phenomenon called two-photon absorption, powered by a near-infrared laser, to activate the motors, avoiding UV light altogether. The technique is now a lot safer and may potentially lead to the highly targeted and effective treatment of tumors anywhere that near-infrared light can penetrate.

UV light is well known to cause damage to DNA in healthy cells, so using high power UV to reach cancer cells may be counterproductive. Two-photon absorption lets a molecule absorb two photons at once, even photons of different frequencies, substantially raising the energy level of that molecule. This permits a low energy near-infrared laser to achieve what was previously possible using only UV light.

“Multiphoton activation is not only more biocompatible but also allows deeper tissue penetration and eliminates any unwanted side effects that may arise with the previously used UV light,” said Robert Pal, a chemist at Durham University, in a press release.

The new approach has already been tried on skin, cervical, breast, and prostate cancer cells, with the molecular motors reaching their targets and drilling through them with haste. The cells died within minutes, and the researchers discovered that their drills were able to penetrate not only the cellular walls, but the chromatin, and other intracellular components.

It is hoped that not only will these drills target tumors, but also conglomerations of antibiotic-resistant bacteria, as such colonies often have incredible defenses that only physical brute-force methods, such as drilling, can get through.

vamtam-theme-circle-post
 Category Updates
While the COVID-19 pandemic has seen some countries respond well to the ongoing health crisis for their own populations, it has also – despite decades of increasing and...
Read More

How Medical Device Manufacturers Can Change Marketing and Sales CapabilitiesSwedish teledermatology company teams up with AHSN in Wessex