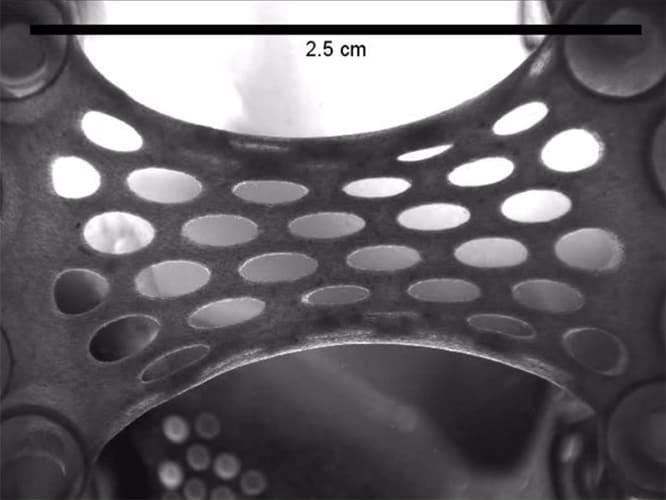 Stem cell therapies to heal damaged hearts have proven to be lacking so far, probably because simply injecting new cells into afflicted regions isn’t enough. Researchers from Imperial College London have now created patches made of cardiac tissue to sew over damaged areas of the heart. These patches, which can beat on their own to the tune of a pacemaker, will soon be tested on heart attack victims in planned clinical trials.

Made of stem cells carefully differentiated into cardiomyocytes, the patches, which are about the size of a small coin and contain approximately 50 million cells, can expand in size with every contraction. They initially help the heart to compensate for lost pumping power, but hopefully will eventually integrate with the heart and effectively replace the damaged tissues.

The Imperial team already successfully tested the patches in lab rabbits and demonstrated a variety of signs of improvement in the rabbits’ cardiac abilities post-infarct. These include the left ventricle recovering its strength, normal ECG  tracings, and blood vessels proliferating into the patches to feed the newly introduced tissue. All this happened within about a month following the implantation of the patches.

These results have provided the researchers with a green light to begin clinical trials, which will first test the safety of this approach and involve a small number of patients. Following this, it is expected that larger studies will evaluate the benefit of the therapy in humans.

The research was presented and upcoming studies announced at the British Cardiovascular Society’s conference in Manchester this week.

vamtam-theme-circle-post
 Category Updates
While the COVID-19 pandemic has seen some countries respond well to the ongoing health crisis for their own populations, it has also – despite decades of increasing and...
Read More

IMPEDE-FX Embolization Plug Cleared in U.S. for Peripheral Arteries‘Skype doctors’ prevent 3,000 A&E visits in Manchester