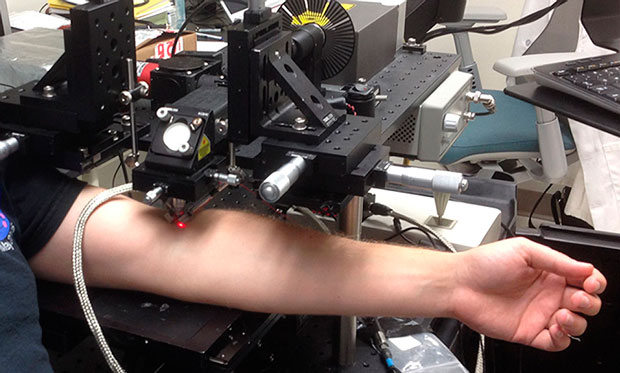 Lasers are known to do remarkable things in medicine, but their use in targeting diseased tissue is not as widespread as everyone expected it to be decades ago. One issue is that lasers are pretty indiscriminate and traditionally have beams that are still too large for extremely fine work. Researchers at the University of Arkansas for Medical Sciences have developed a laser so small that it can fit inside a cell and shine from within. Being able to produce coherent, high power light from the interior of cells leads to all sorts of interesting applications, including up-close assessments of cells for disease and even selective killing of tumor cells without harming surrounding tissues.

The new laser is actually a spaser, which is a plasmonic nanolaser that stores energy within so-called surface plasmon polaritons. It is only 22 nanometers in width, but can generate light at wavelengths much larger than that. As part of the research, the scientists developed a way of forming dynamic vapor nanobubbles around their spaser that result in huge boosts in intensity for the device. It becomes at least a hundred times more intense in its illuminating properties than quantum dots, and its spectral width is 30 times narrower. This allows the new spaser to kill cancer cells, as its light, resulting heat, and the accompanying nanobubbles work together to make life miserable for living cells.

The researchers have already shown a proof of concept by targeting circulating tumor cells using the spaser. In the future, it is envisioned that such spasers will be delivered directly to the sites of tumors, as they can be bound to folic acid and other chemical compounds that tend to gather in large quantities near cancer cells. There, the spasers will be able to analyze the cells and destroy the cancerous cells one by one, leaving everything else perfectly intact.

“According to our data, spasers are small enough so as not to adversely influence cell functions, specific enough to target desired cells, bright enough to be detectable in complex biological backgrounds, and plasmonically active enough to generate the desired photomechanical therapeutic effect that can kill tumor cells, such as triple negative breast cancer cells that are resistant to conventional chemotherapy,” said Vladimir Zharov, Ph.D., D.Sc., the lead researcher of the study appearing in Nature Communications.

Via: University of Arkansas for Medical Sciences

vamtam-theme-circle-post
 Category Updates
While the COVID-19 pandemic has seen some countries respond well to the ongoing health crisis for their own populations, it has also – despite decades of increasing and...
Read More

MX3 Diagnostics Unveils Saliva-Based Hydration Testing SystemDigital Healthcare Scientist role to be created through new degree