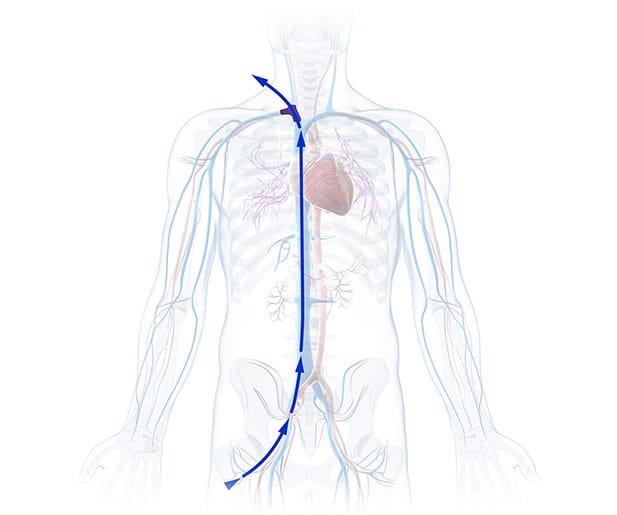 The right internal jugular vein is typically the ideal access point for performing hemodialysis via a central venous catheter. Yet, in close to half of patients there’s an obstruction that makes this either a serious challenge or an impossibility. Now, a device called the Surfacer Inside-Out Access Catheter System has been cleared via the FDA De Novo classification, and can penetrate the obstruction and actually use it to its advantage to restore access to the vein.

The device is delivered through the right femoral vein and up into the right internal jugular so it rests within the obstruction. From there, the Surfacer is used to release a needle wire from within the body to the outside so that a sheath can now be pushed into the vein and a catheter positioned. The obstruction acts to anchor the needle during this process, turning a hurdle for traditional catheter placement systems into an advantage.

This is a big improvement over the current option of simply using a different vein, which doesn’t help in creating a fistula that is normally used for hemodialysis. In turn, patients will benefit and costs may be significantly reduced when managing dialysis patients with upper body venous occlusions.

The technology was approved a few years ago in Europe, but it took longer than expected to receive a green light from the FDA.

“We are thrilled BVT has reached this important milestone. For the first time ever, physicians in the U.S. can offer patients a reliable and repeatable solution to treat central venous obstructions and restore access to the right internal jugular vein – the preferred access site,” stated Gabriele Niederauer, Ph.D., CEO and President of Bluegrass Vascular, in a press release. “Through our experience in Europe and other international sites, the Surfacer System has consistently demonstrated a positive clinical impact. We are eager to bring the Surfacer System and its important benefits to patients in the US.”

Some details about the study that led to the FDA’s decision, according to Bluegrass:

Approval is based on the results of the SAVE-US trial. Of the thirty enrolled patients, 90% met both the primary and secondary efficacy endpoints despite a complex patient population comprised largely of Type 3 and 4 obstructions (3 or more obstructed vessels). No device related adverse events were reported, confirming the safety and performance of the Surfacer System.

Here’s a video explaining the workings of the Surfacer:

vamtam-theme-circle-post
 Category Updates
While the COVID-19 pandemic has seen some countries respond well to the ongoing health crisis for their own populations, it has also – despite decades of increasing and...
Read More

Scientists Make Organs Transparent | MedgadgetVOCSN 5-in-1 Portable Ventilator: Interview with Chris Kiple, CEO of Ventec