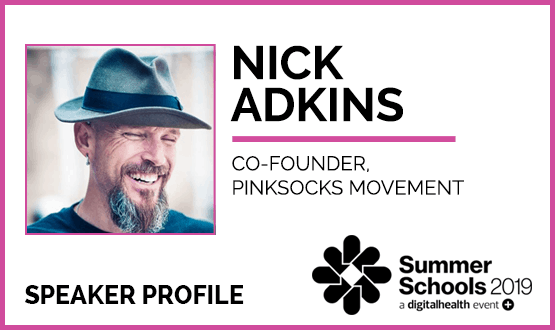 This year’s Digital Health Summer Schools is to turn a bright shade of pink as it welcomes US native Nick Adkins.

Adkins is the founder of the pinksocks movement – a “gifting” community which prides itself on promoting human connections.

Pinksocks is a not-for-profit organisation which encourages members to gift pink socks to others in order to build networks and contacts.

It was a trip to The Burning Man Festival in 2010 which kicked off the idea.

Speaking to Digital Health News ahead of Summer Schools next month, Adkins said that he had been a “suit and tie” person for the majority of his life as a healthcare CEO, but a trip to the festival changed his life.

It was one of the festival’s principles that peaked Adkins’s interest – “gifting” an act which the festival sees as an “unconditional” value.

The website adds: “Gifting does not contemplate a return or an exchange for something of equal value.”

It was this principle that lead to Adkins to start pinksocks with friend, and co-founder at a healthtech startup, Andrew Richards.

The pair attended a health event in Chicago in 2015 where their brightly coloured socks proved to be a hit and the rest, they say, is history.

Adkins explains how the socks attract people’s attention, encouraging people to “connect” with each other.

A number of people in the NHS IT community are part of the pinksocks “tribe” and Adkins said he is looking to bring the sense of collaboration to this year’s Summer Schools.

He said he was hoping to lead some exercises which will help “prompt conversations” between delegates.

You’ll see Nick at Digital Health Summer Schools, which this year is being held at the University of Leeds on 18 and 19 July.

vamtam-theme-circle-post
 Category Updates
While the COVID-19 pandemic has seen some countries respond well to the ongoing health crisis for their own populations, it has also – despite decades of increasing and...
Read More

IMS MAXIMS and Better join forces to provide e-prescribing softwareStretchable E-Tattoo for Long-Term Heart Monitoring